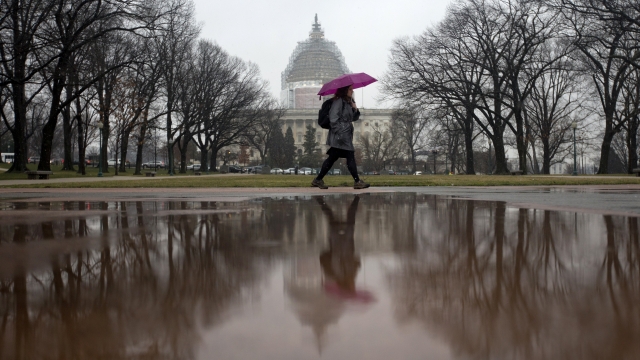 Low pay for congressional staff sometimes shuts out many people of color and people who don't come from privileged backgrounds.

The Instagram account Dear White Staffers is a popular meme page geared toward people of color working on Capitol Hill and in government agencies.

In recent weeks, however, it's become a forum for staffers to anonymously share stories about issues they have faced working for specific members of Congress. And it could have a real impact on both the conditions congressional staff deal with and changing who gets to work in Congress.

Earlier this month, a group of congressional staffers announced an unprecedented effort to unionize. This is the byproduct of years of work done by people who haven't been well paid in an environment that still isn't especially diverse.

To clear up some misconceptions here, these are white collar jobs that require dressing up, but working in the halls of Congress doesn't exactly mean you're making bank.

Staffers, especially at the entry level, can have full-time jobs working in Congress and have to rely on government benefits like food stamps or work a second job just to afford to get by.

Take Don Bell, for example. He now works in career development at the University of Connecticut School of Law, but he worked more than three years on Capitol Hill as a Senate staffer in the office of Senator Richard Blumenthal and served as president of the Senate Black Legislative Staff Caucus.

He loved his time on the Hill and credits the office for getting him a stipend even before he was brought on full-time and for promoting him and supporting his development. But early on, he started out unpaid and had a second job you wouldn't expect a congressional staffer to need.

"I was a lawyer by day working on policy and a cashier at Wal-Mart at night," Bell said. "And as you can imagine, those were very long days, going from one job to the other, just trying to make it financially. I came to D.C. with nothing coming from a family that didn't have any means."

And that required some major sacrifices.

"By the time I started full-time in Senator Blumenthal's office as the judiciary legislative correspondent, I was two weeks away from defaulting on my student loans," Bell said. "So I put all of my chips in the middle of the table to have the opportunity to work on Capitol Hill."

It might come as a surprise, but these staffers are often the ones actually writing the laws. Members of Congress are public faces, and they have a wide range of work, including committee meetings. But when it comes to how the sausage is actually made, markup meetings — where the bulk of any given bill gets written — are usually attended by staffers, sometimes even low-level ones.

All those cost issues don't even account for internships, which were unpaid for a long time on Capitol Hill. When you factor in the cost of living, transportation and other essentials, interning could cost thousands of dollars. If you're stretching out every dollar, even some small things can be a challenge.

Carlos Mark Vera was an intern on Capitol Hill and at the White House.

"It's little things that you normally think about," Vera said. "You have to wear professional clothing every day. I only owned one suit, so my family had to kind of pitch in to buy me another one. So it definitely was a struggle."

His experience struggling to afford an unpaid internship led him to found Pay Our Interns — a group that's pressuring offices on Capitol Hill and other government agencies to, essentially, pay their interns. He argues that not paying interns really limits the pool of who can do it.

"You need housing, so that's rent, any professional clothing, transportation, and we know that on average, and an unpaid internship can cost $6000 for three months. So unless you have that money just laying around, it really puts a lot of folks that are working class middle class at a disadvantage."

There's been some positive change on this front. Every congressional office now has money set aside  — each House office has $25,000 set aside specifically to pay interns.

But those funds haven't necessarily led to congressional offices hiring a representative set of interns.

A report last year by Pay Our Interns found that 76% of paid congressional interns were white, even though white students make up just 52% of the national undergraduate student population.

And that gap, which is reflected in full-time and senior staff too, has consequences for who gets to shape policy. Ruby Robles, a current Capitol Hill staffer and a spokesperson for the Congressional Hispanic Staffers Association or CHSA, says it affects a lot of members of the group.

"A lot of us [are] Latinos, but some of us, we migrated to this country," Robles said. "We are first generation college students, and then we made our way all the way to Washington, D.C. A lot of us are working on Capitol Hill because we are we want to work in public service. It's the American dream, but the higher pay issues, sometimes they become a barrier for many people."

A survey by Issue One, a nonpartisan group looking to reduce the influence of money in politics, found that 13% of all Capitol Hill staff — over 1,200 people — made less than the salary MIT estimates would constitute a living wage of $42,610 in Washington, D.C. But if you look at staff assistants, the most common entry-level full-time job on Capitol Hill, that rate jumps to 70% making less than the estimated living wage in D.C.

The low pay means, sometimes, the only people who can take these staff jobs are people supported financially by their parents. That leads to the population of staffers skewing whiter and wealthier. And as a lot of current and former staffers are pointing out, it shuts out many people of color and people who don't come from privileged backgrounds.

The result is a less diverse workforce. The nonpartisan Joint Center for Political and Economic Studies estimated in a 2020 report that people of color made up just 13.7% of all top-level House staff, and just 11% of all top-level Senate staff.

And that can make a real difference when crafting policies.

"Congressional staffers are essential in ensuring that the policy being made has been effectively vetted and is reflective of the hopes and aspirations of constituents across the country, and so if we don't have a diverse set of people, skills experiences in those decision-making rooms is much more likely that we aren't going to get the best policy for people at the ground level back home," Bell said.

And while staffers of color are at the forefront of this recent push, and many of those are Democrats, the issues we’re seeing here affect staffers of both parties from all backgrounds.

Audrey Henson is a former congressional staffer from a low-income background and a current Republican congressional candidate in Florida. She was the founder of College to Congress, a group that provides financial support to congressional interns and staff. She's no longer with the group, but the shock she felt when she found she'd be paid $25,000 a year for her full-time job still sticks with her.

"I'll never forget when I filed my tax returns in 2013 as a Capitol Hill staffer, and after I submitted them, the first page that came up was It looks like you qualify for Medicaid and food subsidy benefits," Henson said. "That, to me, almost felt like a dagger in my heart because I was working for a boss that was anti-subsidy and that really showed me, wow, the way that our Congress works, the way that they treat their staff, this is absolutely backwards."

The circumstances may have been tough for a lot of current and former staffers on Capitol Hill, but folks on the Hill see the emergence of the recent unionization effort and more public criticism of working conditions as an opportunity for things to change.

"I think that there's some room for change here, and also there's really going to be a really big push," Henson said. "So I am hopeful that hopefully the national attention that this has gathered will lead to change."