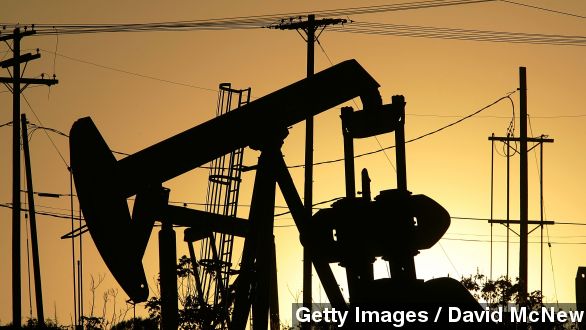 The $34.6 billion deal between Halliburton and Baker Hughes comes at a time when oil prices are hitting their lowest points in years.

While consumers might be rejoicing over falling prices at the pump, some in the oil business are not. Now two of them are teaming up — whether the smaller of the two likes it or not.

Bloomberg calls it the "largest takeover of a U.S. energy company in years" and notes the combined companies will still be just over half the size of the largest worldwide oil field services provider, Schlumberger Ltd.

And though this is a huge deal in the oil realm, it's getting just as much attention for the negotiations leading up to the agreement.

As The Wall Street Journal reported last week, things started to get hostile between the two sides. Halliburton reportedly threatened to force out Baker Hughes' board in an effort to get the deal done.

CNBC: "There was suspicion because Baker Hughes had said, 'We are not doing it.' What happened last week was they were in talks and Baker said no good. Now we are back, and this is is a friendly transaction."

And USA Today points out the deal also has implications for recently falling oil prices. The outlet writes that barrels of West Texas Intermediate crude reached their lowest price in the last three years, "creating both havoc and opportunity for companies tied to the price of oil."

Much of that price drop is attributed to increased U.S. shale oil production through fracking and the Organization of the Petroleum Exporting Countries' current unwillingness to lower its own oil production and limit supply. (Video via Marathon Oil Corp.)

BUSINESS NEWS NETWORK: "A massive deal but against the backdrop of a turndown in the oil market."

"Which is probably why this deal has come together at this time. "

"Yeah, it could well be because they need power against the oil companies."

The deal is expected to close in the second half of next year but will also likely face intense federal antitrust scrutiny.

This video includes images from Getty Images and Jason Sussberg / CC BY 2.0.