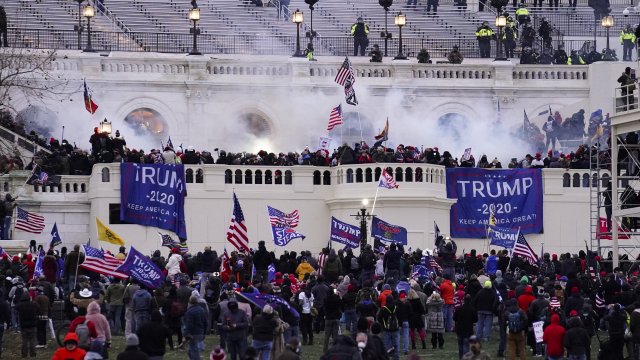 After the latest news regarding the Jan. 6 insurrection, Newsy's "Morning Rush" hosts Alex Livingston and Rob Nelson spoke with Lt. Gen. Russel Honoré to get his take on some of the developments. He oversaw security review for Congress following the assault on the Capitol.

NEWSY'S ALEX LIVINGSTON: So initially, what are your thoughts on the new developments this morning and what the House Select Committee has presented so far?

LT. GEN. RUSSEL HONORÉ: Well our report focused on the actions of the Capitol Police securing the Capitol, along with the D.C. Metropolitan Police and what actions need to be taken to secure the Capitol. The House put forward about a $2.9 billion plan and it ended up being $1.8 billion. Sen. Leahy did not approve many of the recommendations that were made to add police. We recommended 400 additional police that could be used to secure the Capitol, as well as secure members. That was not approved in the Senate. And as far as what I've seen come out of committee, it is evident — my perception was that the White House was complicit and former President Trump motivated the mob to go to the Capitol and disrupt the count of the ballots. That's my perception from the day I watched it on television and the actions of President Trump that have now been documented by people who worked for him that have come forward and said that he was not involved in preventing the mob but motivating the mob to go to the Capitol to disrupt the election process.

NEWSY'S ROB NELSON: Quite unexpectedly, the investigation has now taken a little bit of a turn examining the Secret Service — the very men and women who are responsible for protecting the president of the United States, taking the bullet if need be. And now, there's the case of all these missing text messages from Jan. 5 and Jan. 6 that they say was part of a device replacement program, just a normal purge. Many people are skeptical about that and now it's all under an investigation and some folks are lawyered up. What is your read about that situation, that texts from two very critical days in our history were not saved or preserved some way by, of all agencies, the Secret Service?

HONORÉ: You know, at the end of the day when we did our internal investigation with the Capitol Police and other government agencies, I said, "Don't worry. Everything that happened between the Secret Service will be recorded. The Justice Department will have access to that, to things that we can't see or conversations we didn't hear." Because there always was concern about the coordination between the president's Secret Service team and the vice president's Secret Service team. I said, "Don't worry about it, team," is what I told my team task force that was working on this. All that is preserved, that information will dot the I's and cross the T's of what we didn't see." Then, lo and behold, the Secret Service has lost their records. That's a very precarious move. And it gives rise for many Americans to believe, "Can we now trust the Secret Service?" One of the world's preeminent law enforcement agencies is now tied into a political mess inferring that some of the Secret Service may have supported the big lie and collaborated with the outgoing president in him achieving his objectives.

LIVINGSTON: So over the weekend, Maryland Republican Gov. Larry Hogan spoke about his efforts to get the National Guard on scene during the Jan. 6 attacks.

"I was taking action nonstop for three hours," Gov. Hogan said. "I was on the phone twice with the leaders of Congress. I was talking to the mayor of D.C. I sent in a couple hundred riot-trained Maryland state police almost immediately. I called up the Maryland National Guard and we were attempting, for several hours, to get approval of the Secretary of Defense, which we didn't get. And I finally, several hours later, got Ryan McCarthy, acting secretary of the Army, to say we could send the National Guard."

LIVINGSTON: We were watching minute by minute, second by second how violent things started to progress as we're watching this all unfold on TV, you can imagine several hours later. But how does what Hogan said align with your findings from the security report?

HONORÉ: Well, when we saw that the transmission in our investigation, when we looked at the participation of the D.C. Guard with the Maryland Guard prepared to come in, it's disgraceful because the whole system didn't work that day. We had federal agents all throughout D.C. that were waiting for some invitation from the Capitol Police, "Hey, come help us." That's a crying damn shame. Our government didn't work that day. It did not work. Even the FBI let us down. Christopher Wray said he didn't know about the intelligence coming in for a possible attack. Hell, if he don't know, who knows? It was a lot of complicity going on in the federal agencies that day and everybody looking the other way, you know, hear not, see not, know not. Too much of that happened and the Jan. 6 commission is exposing much of that, but Gov. Hogan did do all he could. The question is: Why did people wait? Our nation's democracy was on the line. Why would the Pentagon wait until somebody tells them to go protect the Capitol? The United States Department of Defense is raised, budgeted for one reason: to protect the United States. They should not need permission to go protect the damn Capitol. That's their damn job: Protect the United States against all enemies, foreign and domestic. Yet, they're waiting for somebody to invite them to go to the Capitol because of the way they set these internal bureaucracies up that don't make sense. You know, fire departments don't wait to be invited to go to the fire. Yet, the Department of Defense and areas of law enforcement — many of them waited for permission or request from the Capitol Police, who were in the middle of a fight for their lives, to be invited to the Capitol. That's a crying damn shame. Government didn't work that day. Thank God for the work of the Capitol Police and the Metro Police who held the line and prevented the balance from being destroyed by the Trump mob.