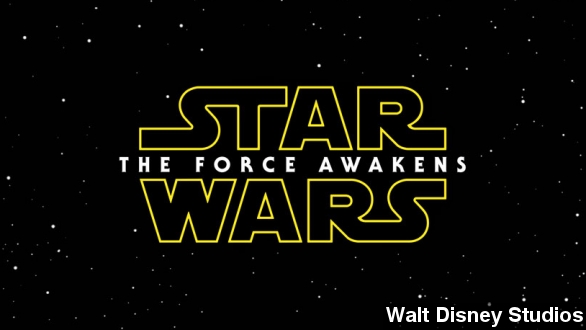 Disney has revealed the title of the upcoming film, but with surprisingly little fanfare. "Star Wars: The Force Awakens" hits theaters Dec. 18, 2015.

In a surprise announcement Thursday, Disney revealed the title of the next "Star Wars" movie — and, unsurprisingly, the Internet freaked.

It was announced on Twitter Thursday that the upcoming movie will be titled "Star Wars: The Force Awakens." Also confirmation the principal photography had been completed, although that was pretty well-known anyway.

Of course, not everyone liked the title. A writer for Vulture said: "This new title makes one wonder: How long was the Force asleep? Is the Force a morning Force or does it not get going until more of a 2 p.m. zone?"

And Comedy Central got in on the ribbing: "It must have fallen asleep watching The Phantom Menace."

Everyone seems to agree it is a better title than 1999's "The Phantom Menace," which was another "Star Wars" movie title the fans hated before the movie even came out, but everyone ended up loving the movie, right?

Yeah, "The Force Awakens" has received a lukewarm reception at best. It even got #rejectedstarwarstitles trending on Twitter.

But what might be the most surprising thing to come out of the announcement is how little fanfare it got from Lucasfilm and Disney.

ScreenCrush writes that while Marvel holds massive events for this type of announcement, all "The Force Awakens" got was a few posts on social media.

That led some outlets such as Cinema Blend to speculate the announcement could be making way for something bigger, a teaser trailer to be released later this year. Shooting did wrap up last week.

But this is a "Star Wars" movie, after all. That means a lot of special effects and months worth of work in the editing bay for J.J. Abrams and team.

So far, not much has been confirmed about Abrams' "Star Wars" plotline, other than it will be picking up the story sometime after the original trilogy.

"The Force Awakens" is scheduled to hit theaters Dec. 18, 2015, and is one of six planned movies set in the "Star Wars" universe. May the force be with you ... and be awake.