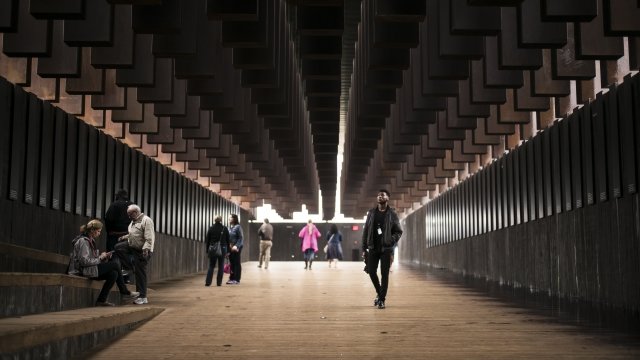 A new memorial and museum in Alabama confronts the brutal lynchings of the past while reflecting on inequality today.

Museums usually pay homage to the past, but this newly opened memorial and museum also takes a critical look at race relations today. Eight hundred steel columns are suspended from the ceiling — one for every U.S. county where a lynching took place. Engraved in them are 4,400 names of black people and victims of lynchings and racial killings.

"Most museums are somewhat objective and benign. This one is not. This is aggressive, political," Alabama Tourism Director Lee Sentell told NPR.

In Montgomery, Alabama, the Equal Justice Initiative,  or EJI, spearheaded both the National Memorial for Peace and Justice and the separately housed Legacy Museum, which directly links slavery of the past to mass incarcerations today. Sia Sanneh, senior attorney for EJI said, "Our hope is that by telling the history of the African-American experience in this country, we exposed the narratives that have allowed us to tolerate suffering and injustice among people of color."

Women Wait On Recognition In The Shadow Of Confederate Statues Debate

Michelle Duster has been working for the better part of a decade to get a monument built in honor of Ida B. Wells — her great grandmother.

After the 13th Amendment abolished slavery, lynchings, according to the NAACP, "were becoming a popular way of resolving some of the anger that whites had in relation to the free blacks."

Shirah Dedman is the great granddaughter of Thomas Miles Sr., one of the many remembered at the memorial. The black businessman was hanged because he was accused of passing a note to a white woman. The police let him go, but a mob was waiting for him.

According to The Marshall Project, black men are imprisoned at more than five times the rate of white men, and one in 10 black children have a parent behind bars, compared with about one in 60 white children. While the museum puts a spotlight on America's horrific past, it also echoes a strikingly similar present — one where people of color are subjected to police violence and often presumed guilty.

Stephon Clark was shot while holding a cellphone. Authorities say they were responding to a call about a suspect breaking car windows nearby.

Dedman said: "The point of these lynchings at the time is that there was no accountability, so to have accountability, that would completely change the black experience in America. And the fact that as a black person, you don't expect justice. I'm not trying to get anybody to erase the past. What I'm trying to say now is that we bring it to the present. You have to recognize the past to move forward."