France And UK Work Through Border Issues In Summit 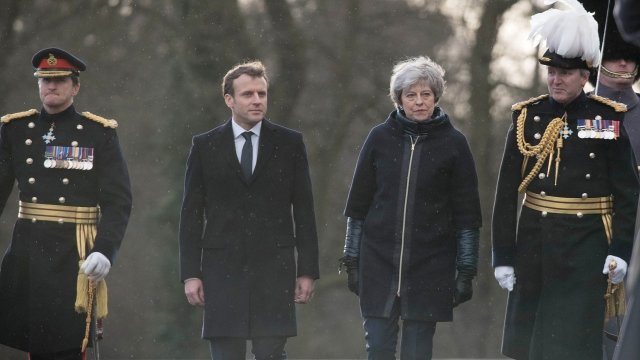 With Brexit looming overhead, U.K. Prime Minister Theresa May and French President Emmanuel Macron are working to preserve ties between their two countries.

The two leaders inked a new agreement on border security during a summit at the Sandhurst military academy. May pledged to spend an extra $61 million on security at the Calais border crossing, while Macron vowed to speed up migrant processing at that border.

The U.K.-France border has been governed by the Touquet treaty, which shifts the border boundaries for both countries across the channel. So, people can go to Calais, France, to cross from France to the U.K., or to Kent, England, to do the opposite.

The European Union airs a tone of reconciliation as it tightens proposed restrictions on the Brexit transition.

That treaty is part of the reason why a large migrant camp known as "the Jungle" formed in Calais several years ago. The French government started dismantling the camp in 2016 following controversies about the treatment of migrants seeking entry into the U.K.

Macron initially vowed to renegotiate the treaty after he took office. And the U.K. needs to stay on good terms with France if it wants a favorable deal on its exit from the European Union.

The U.K. and France also pledged to support the other's military initiatives in Estonia and Mali, respectively. And to sweeten the deal, Macron offered to let the U.K. borrow the Bayeux Tapestry in 2022.