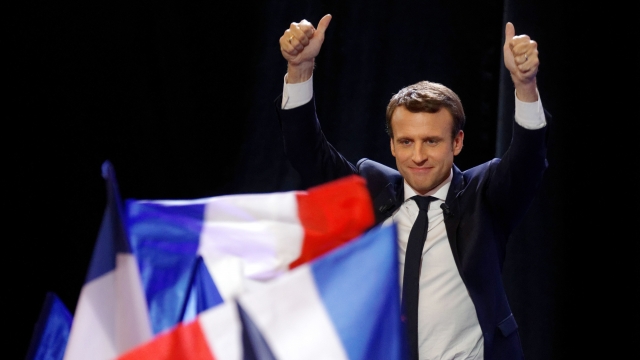 Some fear what France would be like under far-right contender Marine Le Pen.

French presidential candidate Emmanuel Macron is getting support from all sides of the political spectrum, as some fear what the country would be like under his rival, Marine Le Pen.

The Results Are In For France's Presidential Election

Two candidates are heading for a runoff on May 7.

Out of Sunday's 11 candidates, the centrist Macron and far-right Le Pen finished in the top two. They'll now face just each other in May's runoff.

Le Pen finished just two points behind Macron on Sunday while earning her political party the most votes it's ever gotten.

Soon after the results came in, two of Macron's major rivals in the race endorsed him –– Republican Francois Fillon and Socialist Benoit Hamon.

Even France's current president, Francois Hollande, said a Le Pen victory would put the country in danger. He specifically called out Le Pen's desire to leave the European Union.

As for how much help Macron really needs — that's up for debate.

Polls have consistently been showing a Macron-Le Pen matchup could end in Macron's favor. Some even predict a blowout.

But other sources have been questioning the accuracy of French polls.

The argument against Macron is his centrist position might not be enough to get voters from both sides of the spectrum to show up at the polls and beat Le Pen's reliable base.