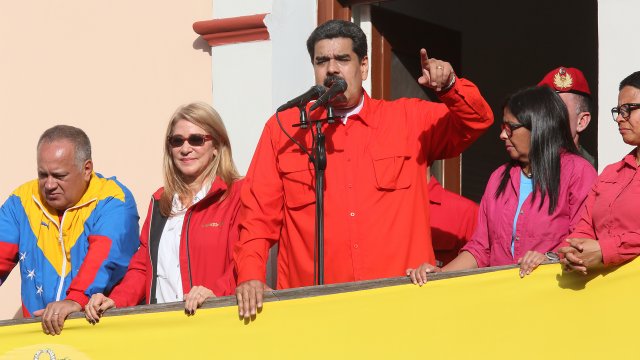 With international support, Venezuelan opposition leader Juan Guaidó might be the most serious challenger that the country's president has faced.

Opposition leader Juan Guaidó's declaration that he is the acting president of Venezuela is giving current President Nicolás Maduro the most serious challenge his regime has ever faced.

Guaidó's claim to power rests on Maduro's tainted victory in elections that were widely deemed unfair last year. Guiadó argues he now has more democratic legitimacy than Maduro, since his role stems from the less controversial National Assembly elections in 2015.

Maduro's government has survived uprisings against it in the past. But Guiadó's claim to power has been recognized by a host of other countries, including the United States. That support might give the opposition some added political power.

Monica de Bolle, Senior Fellow at the Peterson Institute for International Economics, told Newsy: "The opposition is sort of hoping that kind of international pressure might lead some of the army dissidents, some of the officials that no longer support Maduro and want him out to become more vocal and to actually join their movement. ... The next move that we have to watch for is whether those disgruntled army officers and in parts of the military are going to be joining forces with the opposition which would lead to an ouster of Maduro de facto."

There have been some recent defections in the military, including a brief rebellion by a national guard unit. But top military generals have also been making public statements of support for Maduro following Guaidó's announcement, and Guaidó doesn't appear to have enough support from the country's neighbors to prompt a military intervention.

That caution may not extend to the U.S., however: President Trump hasn't ruled out military intervention in the country.

Even if Guaidó does somehow wrest power from Maduro, he'll face the daunting task of rebuilding Venezuela's shattered economy, which has been devastated by massive inflation, mass emigration and shortages of basic goods. And it's not clear whether the country's opposition parties that are currently united against Maduro, will still band together if he's removed from power.