Mail Piling Up In Montana Due To USPS Staffing Shortages 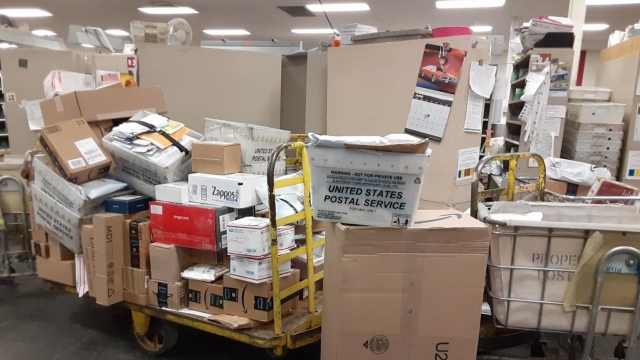 Residents in Bozeman, Montana, spoke with Newsy about what they call massive delays in their mail service.

Reported staffing shortages at the United States Postal Service are causing major headaches for some people who say they haven't received their mail in more than a week.

Multiple residents in Bozeman, Montana, spoke with Newsy about what they call massive delays in their mail service. One woman who runs a construction company says the company has failed to receive multiple payments, and she worries about her own missing bills.

A source within the Bozeman USPS sent Newsy photos of what they say is mail stacked up in the office, saying some of it has been waiting at least five days to go out. A separate source with USPS says five different routes didn't go out on Tuesday, which they say equates to anywhere from 500 to 1,000 addresses per route.

Employees say part of the problem is staffing. Emails leaked to Newsy show regional USPS managers discussing how hard it is to hire people in Bozeman as they compete with fast food restaurants, grocery stores and gas stations paying equal or higher wages.

"I've been to many struggling areas, but I've never seen anything like Bozeman before," a postmaster from Idaho writes, later saying only 11 people showed up to a job fair when more than 80 showed up at others.

"In my opinion, this area will not improve from job fairs alone. They either need the starting wages raised due to cost of living, or offer a sign on bonus to anyone who makes it past their 90 days or post career positions externally instead of the non-career."

Newsy reached out to the offices of Sen. Jon Tester and Sen. Steve Daines, whose communications teams confirmed constituents called both of their offices to complain about disruptions. Both senators wrote letters to different USPS officials after our correspondence.

On July 13, Sen. Tester wrote to the vice president and district manager of the agency, saying, "I understand that USPS leadership is aware of these issues, which appear to be rooted in the current challenge of hiring and retaining staff in the competitive Bozeman job market."

Sen. Daines wrote USPS Postmaster General Louis DeJoy July 14, saying: "Hundreds of my constituents have not received any mail in over seven days and cannot reach any full-time USPS employee in the area. Rural and urban Montanans rely on the USPS for the timely delivery of everything from essential prescriptions, jury summons, bills, and letters that enable rural small businesses to compete on the global stage and keep families connected." Daines went on to ask DeJoy to "rectify the interruption as soon as possible."

A separate USPS source told Newsy the Missoula branch faces similar issues with hiring and retaining employees, with many burning out while working long hours six days a week. A Bozeman USPS source says that office went from more than 120 staff members to fewer than 50.

Meanwhile, people without mail delivery report waiting in lines at the Bozeman post office for more than 40 minutes, eventually leaving without answers or mail. Newsy called three phone numbers for customer service supervisors in Missoula, along with the postmaster, and each voicemail inbox was full.

Newsy reached out to public relations representatives with the USPS, specifically asking about the staffing shortage both in Montana and nationwide. We also requested the undeliverable mail report specific to Bozeman.

Thursday, a USPS representative responded with a statement, saying Bozeman "is a high-growth area and we are hiring city carriers, rural carriers and clerks, and utilizing resources from surrounding areas while we fill the gap." The statement goes on to say the mail volume to be delivered after holiday weekends often "exceeded the number of available delivery hours. As a result, we couldn't reach some homes and businesses, but we delivered to them the next day. Due to continued staffing issues, there may be days when a customer does not receive mail, but we are rotating employees so those customers will receive mail the next day."

Shortly after the USPS representative sent the statement, two residents on Hitching Post Road in Bozeman reported getting two days' worth of mail delivered after no deliveries since July 6.

Newsy found other news stories from across the country about staffing shortages in local USPS offices, with many promoting job fairs. A story in the Boston Globe from late June spells out the same problem, with a local resident saying, "Monday, no mail. Tuesday, no mail … Wednesday, I went to the post office, and to my total and complete amazement and surprise, the door was open but there was no one working."