Mail Sorting Machines Will Not Be Reduced Before Election Day 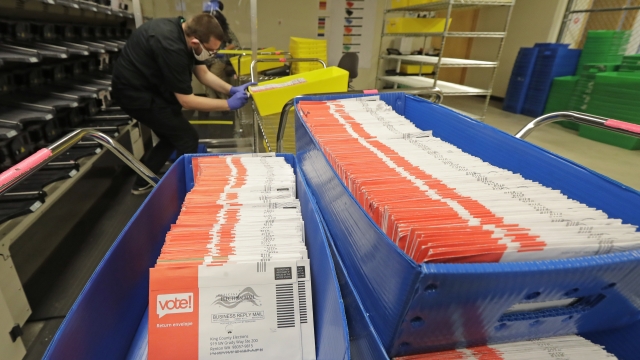 The Postal Service and the White House now say that postal boxes and sorting machines will not be removed prior to Election Day.

A USPS spokesperson said it would postpone postal box removal "for a period of 90 days" due to "customer concerns." Additionally, in an interview with CNN Sunday, chief of staff Mark Meadows said no sorting machines would be removed prior to the 2020 Election.

The Postal Service has faced criticism recently for removing equipment and  operational changes prior to the election — when a large surge is expected as more people mail in their ballots.

The Postal Service has warned 46 states that delays in mail delivery could result in vote-by-mail ballots arriving too late to be counted.

President Trump and his administration have attacked, without evidence, mail-in voting as leading to wide-scale voter fraud. Postmaster General Louis DeJoy, an ally of President Trump, has come under fire for moves critics say are an effort to sabotage the postal service. He says he is just trying to run the money-losing service more efficiently.

That rhetoric continued during Meadows' Sunday interview with CNN's Jake Tapper, with the chief of staff claiming that voting by mail would disenfranchise millions of Americans.

“But there’s no evidence of widespread voter fraud,” Tapper said.

“There’s no evidence that there’s not either. That’s the definition of fraud, Jake,” Meadows replied.

A USPS Spokesperson said removal of mail-sorting machines and mailboxes were a cost-saving measure and that it "routinely moves equipment." The House is holding an emergency oversight hearing on August 24th — hoping to ask Postal Service executives about mail delays.