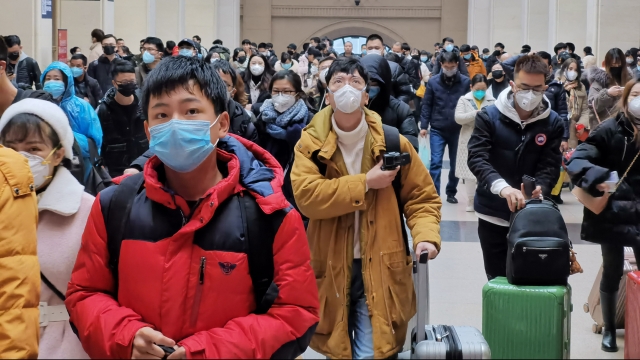 The virus has now killed at least 132 people and infected more than 6,000 others in mainland China.

A deadly coronavirus rapidly spreading through mainland China has now killed at least 132 people and infected more than 6,000 others.

This means there are officially more coronavirus patients in China than the number of people in the country who contracted SARS, or severe acute respiratory syndrome during the 2002-2003 outbreak.

That epidemic almost 20 years ago sickened over 5,300 people in the mainland alone, and killed hundreds of people worldwide.

A number of countries are putting together plans to evacuate their citizens out of Wuhan, the Chinese city at the center of the outbreak.

A chartered flight carrying more than 200 Americans — including diplomats and their families — arrived in Alaska Tuesday night before continuing onward to a U.S. military base in southern California. The passengers were all screened multiple times for coronavirus symptoms over the course of the trip.

Because roughly 1,000 Americans live in Wuhan, the U.S. State Department said it's coming up with additional evacuation plans.

Some might have to travel by land. Multiple airlines across North America, Asia and Europe have all decided to suspend some or all of their flights to China.

These decisions come after the CDC and the U.S. State Department urged Americans to avoid all nonessential travel to China because of the outbreak.