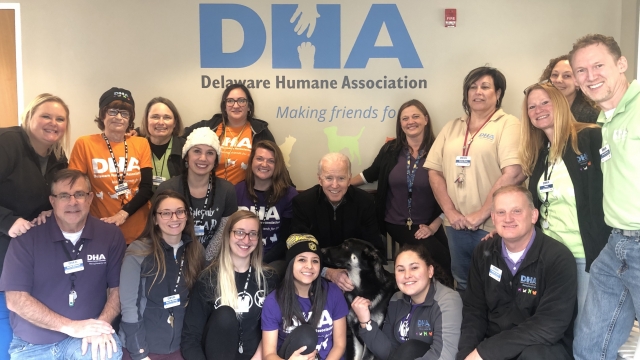 The Bidens fostered and then adopted their younger dog, Major, from the Delaware Humane Association in 2018.

Pets are coming back to the White House, and the new president's younger dog, Major, is making history when he moves in.

"This is just such a monumental moment for shelter dogs and rescue animals everywhere with the spotlight on Major's rags to riches tale," said Cory Topel, marketing manager for the Delaware Humane Association.

Major Biden will be the first rescue dog to live in the White House. He and his five litter mates were just a few weeks old when they were surrendered to the Delaware Humane Association in 2018. Because Major and his siblings needed emergency medical care, DHA posted on social media to drum up donations and potential adopters.

"Ashley Biden, Joe and Jill's daughter ended up seeing the post. And somewhere along the way, she then must have shared it with her parents. So fast forward a little bit … And sure enough, on Easter Sunday, Joe and some of his grandkids knocked at the front door, typically we’re closed on holidays. Some of our staff at first thought, 'Who's this guy at the door with these kids? Don't they know we’re closed?' And then when they got up, they realized who it was," said Topel.

After fostering Major and making sure he got along with their older dog, Champ, the Bidens officially became his forever family.

According to the ASPCA, approximately 6.5 million animals enter shelters in the U.S. each year, and about half of them are dogs. Since the pandemic began, millions of Americans started working from home and animal rescue organizations were able to benefit from that. During 2020, more families volunteered to foster shelter animals and adoptions increased too.

The staff at DHA said they're looking forward to Major serving as an ambassador and spokes-dog for rescue animals across the country.

"We think people just don't realize there are animal shelters everywhere. There are 1000s and 1000s of dogs, cats, all different breeds of animals, anything you might want. I promise you, it's out there somewhere. You just have to do a little digging," said Topel.