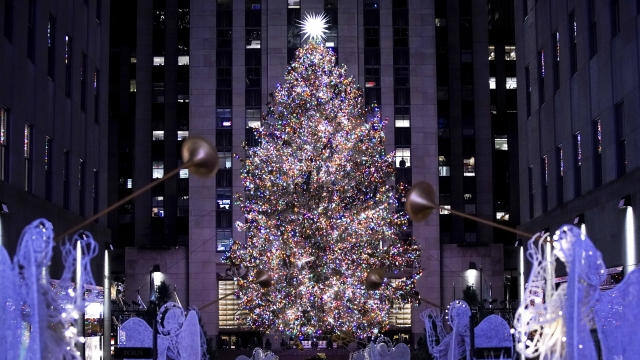 Christmas trees are being lit up across the country as cities continue decades-old traditions.

In Chicago, a 55-foot-tall blue spruce was unveiled in the city's Millennium Park, making spirits bright.

And in New York, the tree lighting ceremony in Rockefeller Center starred 14 tons of Norway spruce with a spike driven into its trunk to keep all 82 feet of it upright. It's a far cry from the first Rockefeller tree in 1931, when workers pooled their money to put up a 20-foot tall balsam fir to lift depression-era spirits. It started a nine-decade tradition.

And in the nation's capital, the national Christmas tree lighting was in President’s Park Wednesday, featuring entertainers LL Cool J, Andy Grammar and Shania Twain. This year's ceremony marks the 100th anniversary of the event. The original tree lighting was inspired by students writing letters to the White House.

Get A Christmas Tree For $5-$20 With U.S. Forest Service Permit

For those in the market for a bit more modest-size tree, Michigan tree grower Cathy Genovese says consumers can expect a good supply this year, but slightly more pricey.

"As you've seen food prices in the store, this is a farm. We use fertilizers; we use other weed items. And we've spent, this year, probably 30-35% more on the inputs that go into the farm and we have raised our prices about 10%," Genovese said.

In central Wisconsin, Erin Pinch is paying $80 for her tree this year and says it's worth every penny to revisit those childhood memories.