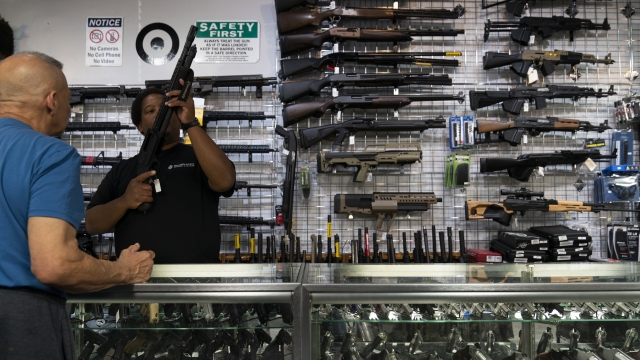 Visa, American Express and Mastercard will separate gun and ammunition purchases from others in records.

Major credit card companies are reclassifying purchases at gun stores and ammunition shops — a change that could pull back the curtain on gun purchases.

Visa, American Express and Mastercard will start implementing the plan, which will separate gun and ammunition purchases from other kinds of shopping for the first time. They had previously been classified as general merchandise.

"The sales have definitely increased over the last several years in comparison to probably the last five," said Vincent Vasquez, a gun store manager in Arizona.

The FBI reports having done 78,571,988 background checks for gun purchases in the last two years. That's more than in any two-year stretch since record-keeping started in 1998.

The speech Tuesday continued President Joe Biden's aggressive rhetoric against the GOP ahead of the midterms in November.

Cyndi Starr is among the many buying a firearm for the first time.

"I came to that decision after months of going back and forth," Starr said. "I would never want to ever harm anybody, never, but I've been close enough to certain violent or potentially violent situations that I had that split second where it's like, 'What's my backup?'"

Gun violence prevention activists hope the new classification for credit card purchases will help differentiate people like Starr from those intending to use a gun to harm people, helping banks see and report suspicious activity.

But of course, not everyone's on board.

Over the weekend, the NRA said the move was about creating a "national registry of gun owners."

The policy is intended only to separately categorize purchases at gun and ammunition stores, not specifically what was purchased. It's a simple label change advocates hope will help curb gun violence.