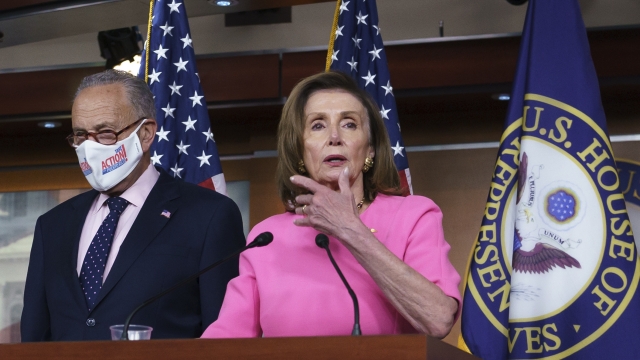 Lawmakers would need to pass a short-term funding bill to stop the government from shutting down Thursday at midnight.

Amid all the noise, Congress has four major priorities to accomplish in the coming days. Two of them are absolutely key to keeping the government open and functioning.

The first is passing a short-term funding bill to stop the government from shutting down Thursday at midnight, which could furlough millions of non-essential federal employees and shutter national parks, along with slowing down federal services like passport applications.

In less than a month, another key deadline is the date the U.S. will hit the debt limit, which is the maximum amount the U.S. can borrow before going into default. But Republicans are opposed to working with Democrats to raise it.

"If we don't increase the debt limit, then we can't pay the bills that have already been accrued," Democratic Sen. Jon Tester said. "This isn't about bills that will be accrued next year. This is the stuff we spent under the, like the Cares Act, for example, it was put in place, a very big bill, and expensive bills replaced because the economy was in tough shape because of COVID-19."

Democrats may be forced to raise it without Republican support through a complicated process they're currently using in an effort to pass some of President Joe Biden's top Democratic priorities, including universal Pre-K, a longer-term expansion of the Child Tax Credit, expanded Medicare coverage for seniors to include vision and dental, free community college, and investments in green energy.

But those priorities are in peril, as two key moderate Democrats say the plan's cost — $3.5 trillion – is too high.

With 50 Democrats and 50 Republicans, any Democrat not on board with the price tag can sink it. But progressives insist on passing President Biden's larger $3.5 trillion bill before allowing a vote on a smaller bipartisan infrastructure bill.

"It's not a progressive caucus plan, it's the president's plan," Democratic Rep. Andy Levin said. "I don't see how we can deal with roads and bridges without dealing with climate change ... We've got to keep these two things together, and that's still our plan."

The measure appears doomed in the House, with GOP leaders telling their members to vote against it.

If Congress can't first agree to keep the government open and raise the debt ceiling — both of which could lead to severe consequences across government and the economy — President Biden's priorities could fail in Congress.