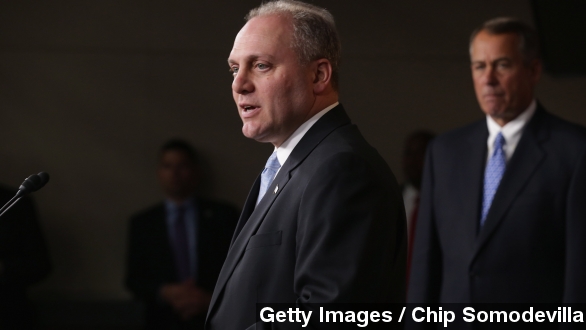 Incoming House Majority Whip Steve Scalise says he didn't know a group he spoke to in 2002 was a white nationalist group.

This is Steve Scalise now.

And this is David Duke.

One is the incoming House Republican Whip — the other — a former KKK leader and Louisiana state representative.

And this is why the two are in the headlines today. Back in 2002, Scalise spoke at a white nationalist event organized by David Duke.

At the time, he was a state rep. According to reports, he spoke at a convention organized by a group called European-American Unity and Rights Organization — founded by David Duke. (Video via RT)

The report came first from a local blogger named Lamar White Jr. A couple quick points: 1) Scalise denies knowing the group was a white nationalist organization. 2) As far as anyone who was there remembers, he didn’t talk about race, but about conservative values and taxes. 3) “Convention” is kind of an inflated term for the event. A former leader of the group says only about 30 people attended.

The obvious reason anyone cares about a 12-year-old event about which there are relatively few details is that as incoming Majority Whip, Steve Scalise will be the third-ranking House Republican in the next Congress.

“He’s been called one of the most powerful conservatives in the House,” a campaign ad read.

Cue the headlines like this one — suggesting that leadership position could be, or should be, stripped before it even starts.

“I hope you know that I’m going to represent all of you in Washington,” said Republican Mia Love at her victory speech in November.

Conventional wisdom is the party that just elected three black members and is making pretty public efforts to reach out to minority voters could suffer from a revelation like this.

A Democrat — and fellow Louisiana Rep. Cedric Richmond told a Times-Picayune reporter, “I don't think Steve has a racist bone in his body.” and suggested Scalise was being used as a political scapegoat.

Then again — Scalise’s claim he didn’t know what kind of group EURO was is — for even some conservative observers — hard to believe.

To that — Scalise says at the time he had no scheduler and pretty much went to speak to any group that extended an invitation. We should also note that in 2004, Scalise had told a local reporter that David Duke’s “message of hate only serves to divide us.”