Making The President Hilarious: A Former Speechwriter Tells His Story 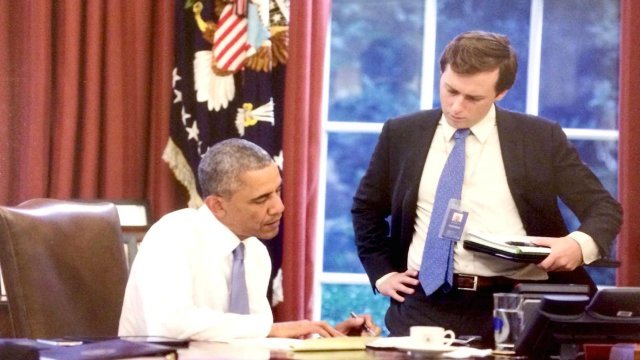 David Litt led the way on four Correspondents dinners and wrote countless speeches for President Obama — we discussed his time in the White House.

David Litt was a speechwriter for President Barack Obama. Now, he's a head writer at Funny or Die — and makes fun of the president and politics for a living.

"As a speechwriter for such a high-profile person, not only do you have to get the message across and say what you want to, but you also have to try to make sure that it can't be spun out of context," Andress said.

"Imagine if you worked for Coca-Cola, and every commercial advertisement, Pepsi sent a team of people to take it out of context," Litt said. "You have to be thinking about that. It can't be the only thing you think about because otherwise you would never write anything interesting, but you have to write something interesting and then look back and say, 'If I was trying to misconstrue this, if I was trying to misrepresent what these words mean, could I do it?'"

If Barack Obama Said It, Cody Keenan Likely Wrote It

Cody Keenan led a team that he says penned 3,577 speeches and statements for President Barack Obama.

And while most of the speeches Litt wrote for the president were policy-related, every year, he let his hair down at least once — as the lead writer for the White House Correspondents Association dinner.

"President Obama was a fan of Keegan-Michael Key and Jordan Peele, particularly of their character Luther the anger translator well before we brought them on stage together," Litt said. "We always wondered if this is the year we can bring them together in real life, but it never worked for a bunch of reasons. Like, in 2012, we were about to have an election. It didn't seem like a good idea to suggest that the president was secretly an angry black man. And then by 2015, it was like, 'OK, this is the year.'"

"Every time Keegan opened his mouth as Luther, President Obama could not stop laughing. It's not the biggest accomplishment of the Obama administration that President Obama was able to not laugh during that, but it's still pretty impressive. Like, there's no way I could have hung in there," Litt added. "In the rehearsal, Key was like, 'Mr. President, just so you know, this is me taking it easy; I'm really gonna go for it for the actual thing.' And he really did."

Andress asked: "One of the things I always felt like I noticed in President Obama's speeches is that he always referenced different people across the country. You're one of the people who gets to interview those folks and talk to them and let them know that they're going to be mentioned in a huge speech in a very public way. I'm curious what that's like?"

Litt responded: "It's one of the most fun parts, or was one of the most fun parts, of my job. It's easy to lose faith in America and certainly in American politics if all you think about is Washington. When you talk to actual Americans who are living their lives around the country every day, it's equally impossible not to have faith in the country and have faith in what politics can do."