Malaria Deaths Have Been Cut Nearly In Half Since 2000 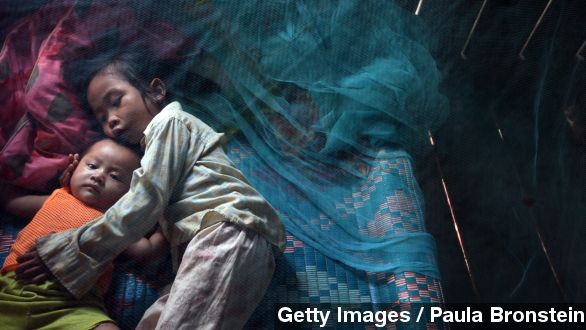 The number of people dying from malaria has been cut in half worldwide, but some factors still threaten efforts to eradicate the disease.

New numbers released by the World Health Organization show worldwide, the number of people dying from malaria has been cut in half.

The malaria mortality rate has fallen by 47 percent worldwide and 54 percent in Africa since 2000, the organization reports.

It attributes much of the success to a distribution of mosquito nets, which helps protect people against bites from infected mosquitoes.

However, the numbers show the disease continues to disproportionately affect children, as about 437,000 of the 584,000 killed by the disease in 2013 were African children 5 years of age and younger.

Some experts are confident the illness can be completely eradicated. But the issue is becoming more difficult as mosquitoes in some countries are developing resistance to insecticide, which makes some methods of prevention less effective.

According to the World Health Organization's report, there are still 278 million people in Africa who lack access to an insecticide-treated mosquito net. The report projects that 214 million nets will be delivered to sub-Saharan Africa alone in 2014. (Video via LifesystemsUK)

But the BBC notes Ebola might slow progress in the fight against malaria by using resources and people normally focused on malaria. A doctor familiar with the situation told the outlet:

"Now those pediatric wards are becoming ghost areas, because of the lack of manpower there. So we don't know who has malaria, and who is dying from it."

And citing a previous report from health officials, Bloomberg says 20,000 people died in 2013 in the nations worst affected by Ebola. That number might be higher in 2014 due to a combination of fewer available resources and people avoiding treatment because they fear they'll contract Ebola from a medical facility.

The World Health Organization's analysis demonstrated that despite a 43 percent increase in population across sub-Saharan Africa, only 128 million people were infected with the disease in 2013, which is down from 173 million in 2000.

If the same rate of annual decrease continues into 2015, the malaria mortality rate will have decreased by 55 percent globally and 62 percent in Africa over the past 13 years.