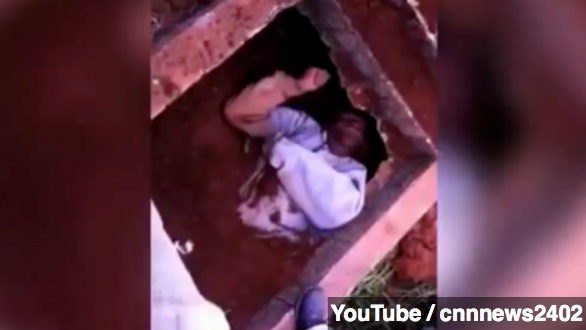 A man in Brazil was pulled alive from a grave last week after a woman saw his hand come up through the ground while visiting the cemetery.

It's like a scene straight out of a living dead horror film.

This man in Brazil was pulled from a grave alive after a woman saw his hand surging through the ground. (Via Daily Mirror)

The woman, who has not been named, said she was visiting a late family member's grave about a week ago in Sao Paulo when she heard a noise. She then saw the ground moving before a hand came up through the ground, followed by a head.

She told the Daily Mail, "I was terrified to see a man, who I thought was dead, trying to get out of the grave." She first ran away screaming — well, who could blame her  — then called police, who reportedly didn't believe her at first and asked if she was trying to pull a prank on them.

She then turned to cemetery officials for help in convincing the police that what she just witnessed was actually real. (Via YouTube / cnnnews2402)

Police believe the man is a former city hall worker and ended up in the grave after getting into a fight in another location. It’s possible his attackers took him to the cemetery while he was passed out after a brutal beating — and buried him alive.

The man is now recovering in a local hospital, where a source said he is "coming back to life." He is also set to undergo psychological testing once he is well enough.