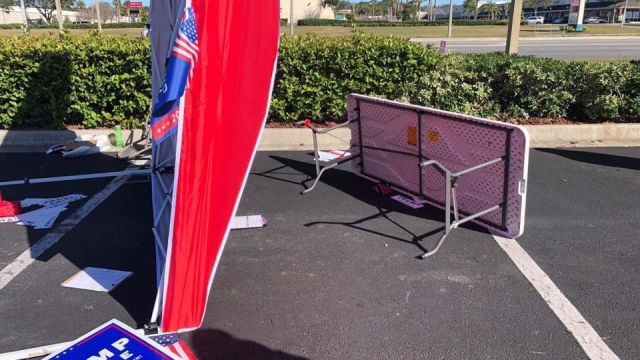 The suspect was charged with aggravated assault, criminal mischief and driving with a suspended driver's license.

A man has been arrested after he allegedly drove a van into a Republican voter registration tent in Florida.

According to the Republican Party of Duval County, a van plowed into a tent where volunteers with President Donald Trump's re-election campaign were working Saturday afternoon. No one was hurt.

The Jacksonville Sheriff's office tweeted Sunday it had arrested 27-year-old Gregory Timm in connection with the incident and charged him with aggravated assault, criminal mischief and driving with a suspended license.

Local authorities are currently looking into whether the incident was politically motivated, but the Duval County GOP believes it "was a partisan political attack."

"He made an obscene gesture and he accelerated into the group of people, who nearly avoided him hitting them," Republican Party of Duval County Chairman Dean Black said. "He had videotaped it as he did it, but he backed up and videotaped it again, because he was proud of his work."

RNC Chairwoman Ronna McDaniel echoed the Duval County GOP's sentiments in a tweet Saturday, saying, "We will not be silenced by cowards, and these disgusting acts will only make us work harder to win November." President Trump retweeted that message, adding, "Be careful tough guys who you play with!"

The Duval County Democratic Party also called it a "cowardly act of violence." It said in a statement: "No one's life should be placed in danger for exercising their first amendment rights. As Democrats, but more importantly, as residents of this great city of Jacksonville, we call on our fellow citizens to act with dignity, civility and respect for one another during this election cycle and beyond."