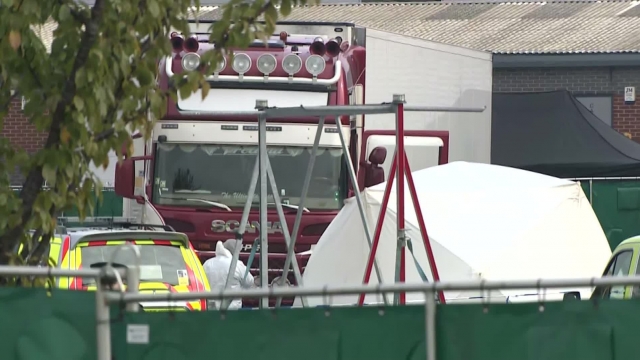 Police believe the container came into England from Belgium, while they think the truck came from Northern Ireland.

Essex Police has been authorized to file charges against the suspected driver of a truck, in which 39 people were found dead in its container on Wednesday.

On Saturday, authorities announced 39 counts against the 25-year-old Northern Irish man whom they say drove the truck. The charges include manslaughter, conspiracy to traffic people, conspiracy to assist unlawful immigration and money laundering. He will appear in court on Monday.

Police are still in the process of identifying the bodies and where they're from using the internationally-recognized Interpol Disaster Victim Identification Standards. They say the process uses I.D. methods including dental comparison, fingerprints and DNA to identify bodies in a "dignified manner, taking into account the needs of the investigation process, the needs of the bereaved and the needs of the community."

Belgium has also opened an investigation into the deaths, as police now believe the container came into England from Belgium. However, they say the truck came from Northern Ireland.

Thirty-one of the deceased were men and eight were women. Officials initially said they were believed to be Chinese nationals but later said they would withhold confirmation on nationality until formal identifications are made.

Reuters reports that Vietnamese families have contacted the country's London embassy about missing relatives. One Vietnamese woman told Reuters she received a text message from her daughter saying she couldn't breathe. It was sent around the time the container would have been on the way to the U.K. Vietnam has launched an investigation into alleged human trafficking activities.

Prime Minister Boris Johnson said he's appalled by the incident, and said the Home Office is working with police to determine what happened. U.N. Secretary-General António Guterres said he was "horrified and deeply saddened," and extended his "deepest condolences to all who have lost family and loved ones."

U.K. police have arrested three more people related to the investigation. Irish police also arrested a man on Saturday in connection with the deaths.