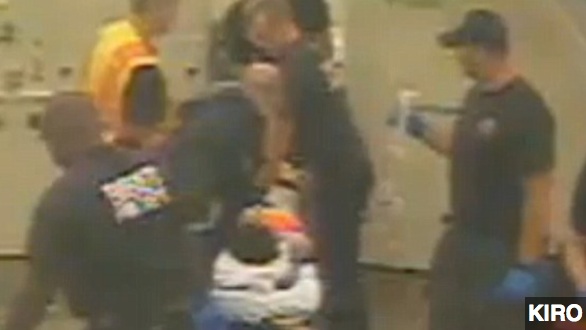 A Washington man in jail for marijuana possession died from an allergic reaction after being given oatmeal with dairy in it.

Back in July 2012, Washington man turned himself in because of an outstanding misdemeanor warrant for marijuana possession. And less than 24 hours later, he was dead. We'll warn you, the surveillance footage of the incident is disturbing.

"Recently released surveillance video shows the shocking moments 22-year-old Michael Saffioti pleaded with guards for help as he suffocated from a fatal allergic reaction." (Via KTVK)

Now, his family is filing a lawsuit against the guards who reportedly ignored Saffioti's pleas for medical help as he endured a severe allergic reaction to oatmeal his family's lawyer says the guards had assured him was safe to eat. (Via KHON)

See, Saffioti suffered from extreme dairy allergies that required him to thoroughly examine everything he ate. Some even called him "bubble boy" because the allergy was so serious.

The jail reportedly had a medical file on Saffioti because of a previous stint in jail, and a laywer for Soffioti's family says guards should have been aware of the allergy. (Via Daily Mail)

But he was served a bowl of dairy oatmeal for breakfast, even after video footage shows him apparently asking guards, servers, and even other inmates if they thought it was okay to eat.

Within minutes, Saffioti reportedly began showing signs of a severe allergic reaction. Thirty-five minutes later, he was found unconscious in his cell. Guards rushed him to the hospital; he was later pronounced dead. (Via WBOC)

And now, more than a year later, Saffioti's mother is filing a $10 million suit claiming there was a "systematic failure to provide adequate medical care" for her son. (Via HeraldNet)

"Our theory is that they absolutely knew about Michael's medical needs. This video that shows Michael clearly made his needs apparent, that his needs were ignored." (Via KIRO)

This is the second multimillion dollar claim this year filed against the jail where Saffioti died. A 27-year-old woman died of a pulmonary infection while incarcerated there in 2011, and her family filed a lawsuit in March.