Man Jumps To His Death During Girlfriend's Shopping Spree 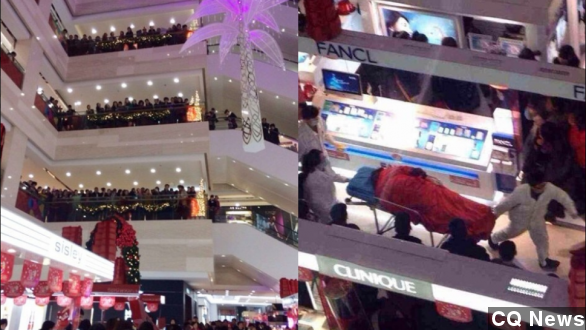 After shopping at the mall all day with his girlfriend, a 38-year-old Chinese man jumped seven floors to his death after she refused to stop shopping.

A Chinese man reportedly took to drastic measures after his girlfriend refused to stop holiday shopping.

After shopping at a mall in China for more than five hours with his girlfriend, 38-year-old Tao Hsiao reportedly responded to her request to go into one more store by leaping over the railing seven floors to his death. (Via CQ News)

According to eyewitnesses, Tao told his girlfriend they already had more bags than they could carry when she asked to go into one last store to check out a special deal on shoes.

A witness said: "He told her she already had enough shoes, more shoes that she could wear in a lifetime and it was pointless buying any more. She started shouting at him accusing him ... of spoiling Christmas, it was a really heated argument." (Via Gawker)

Daily Mail reports: ​"The shouting match ended when the man chucked the bags on the floor and jumped over the balcony, smashing into Christmas decorations on his way down before hitting the floor seven stories below causing shocked shoppers to flee in panic."

Paramedics that rushed to the scene say Tao died on impact. A spokesperson for the shopping center says when he jumped, Tao smashed through a stall on the ground level. No other shoppers were injured.

The spokesperson told the media, "This is a tragic incident, but this time of year can be very stressful for many people." (Via New York Daily News)