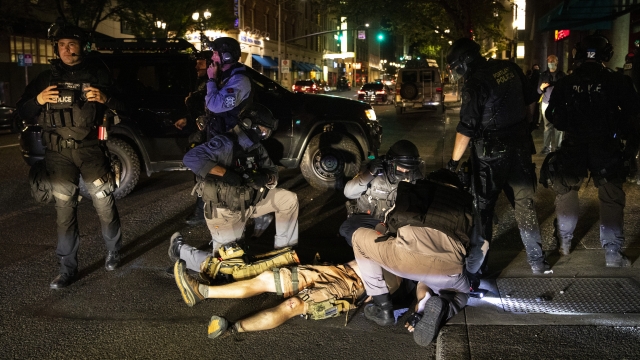 Police say it's unclear whether the shooting is related to fights between Black Lives Matter demonstrators and counter-protest group Patriot Prayer.

Police say it's unclear whether the shooting is related to altercations that broke out in downtown between Black Lives Matter protesters and supporters of President Trump.

Police said after a vehicle caravan of presidential supporters cleared downtown around 8:30 p.m., officers heard gunshots roughly 15 minutes later. They arrived to the scene within a minute, but the man who was shot in the chest did not survive.

The Associated Press reported the man had a hat with the logo for Patriot Prayer, a right-wing group which has counter-protested past demonstrations.

On Sunday, President Trump criticized Portland Mayor Ted Wheeler in a string of tweets, calling him "incompetent" for rejecting the National Guard assistance. Wheeler has said a military presence will only escalate problems there.

This was the third straight Saturday that pro-Trump demonstrators and counter-protesters have clashed in downtown Portland. Demonstrators have been protesting in Portland since Minneapolis police killed George Floyd in May.