Man's Severed Hand Saved By Grafting It To His Ankle 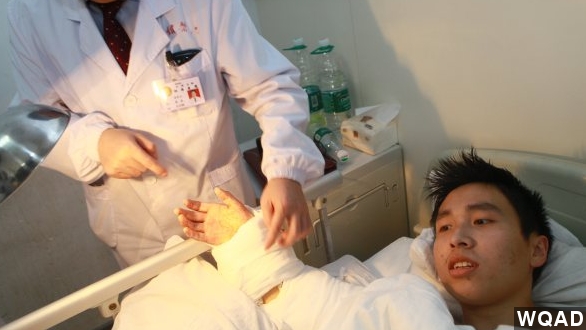 After losing his hand, Chinese factory worker Xie Wei had the detached extremity reattached, but not where it's normally found.

​It sounds like an operation straight out of the workshop of Dr. Frankenstein — but this frightening-looking procedure you're about to see saved a man's hand. We want to warn you, some viewers might find the images in this story a bit graphic.

After losing his hand, Chinese factory worker Xie Wei had the detached extremity reattached, but not where it's normally found. (Via WQAD)

"A worker in China had his right hand cut off in a machine last month. At first doctors thought they could not save it but grafted the hand to the man's ankle." (Via CNN)

He'd spent seven hours looking for a doctor who could reattach his severed hand — all while with it in a plastic bag in a cooler on ice. (Via WXIX)

Eventually, he found a specialist who had performed a similar surgery before — reportedly saving another man's hand by grafting it to his stomach. (Via The Irish Independent)

As Voxxi reports, "[He] finally went under anesthesia, waking up to find his once-severed hand now attached to his calf."

As you can imagine, the man was shocked when he came to. He said his hand, which was not attached to nerves in his leg, felt numb — his leg, heavier than usual.

A little over a month later, doctors said Xie's arm had healed enough and proceeded to reattach the hand in its rightful place last week. (Via KSDK)

Speaking to reporters while still in the hospital, Xie said: "I just thought it was miraculous. I would never have thought that my hand could be saved." (Via The Telegraph)

Despite going without a blood supply for several hours, doctors now expect the hand to fully recover over the next six months. Xie says he can twist his hand but doesn't yet have full movement. (Via Daily Mirror)

As strange as it sounds, attaching body parts in different areas to heal isn't all that out of the ordinary.

Doctors in Baltimore grew a new ear on a woman's arm after an aggressive form of cancer forced the removal of part of her original ear. (Via WJZ-TV)

And highlighting a procedure that grew a man's replacement nose on his forehead, LiveScience says, "despite its extreme appearance, this method is really just a variation of plastic surgery techniques used all the time."

The company Xie worked for did pick up the $50,000 bill for his surgery, but we think most of the credit goes to the doctors. Xie will likely want to give them a high-five — when he's healed, of course.