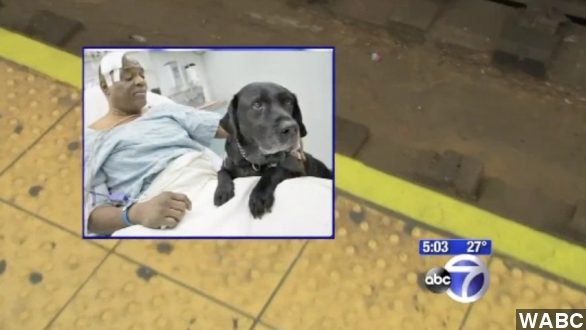 Witnesses say the man's guide dog wouldn't leave his side even as the train passed over the two. One rescuer called it a miracle both survived.

A blind man in New York fainted on a subway platform Tuesday morning and fell into the path of an oncoming train. His seeing-eye dog wouldn't let him face the danger alone.

"So the dog jumped right in after him! A subway worker yelled at them to lie flat, and they did. The dog did, too, just in time as the train rolled above them!" (Via HLN)

A transit worker told reporters he yelled for 60-year-old Cecil Williams to duck. Barely coherent, Williams apparently understood just in time, and both he and his black lab, Orlando, survived. (Via New York Post)

Even with the train's motorman hitting emergency brakes, it wouldn't have stopped in time. Witnesses said they figured both were dead until someone spotted Williams and Orlando under the train.

New York firefighters say they were able to get Williams onto a backboard and back onto the subway platform before taking him to the hospital. One fire official called the close call a miracle. (Via WABC)

Emergency crews say Williams suffered just cuts and a bruise from the fall. The first thing he said when those firefighters got to him? What do you think?

"He asked us how his dog was doing. We told him that his dog was fine. The police officer had his dog."

"A dog he may be forced to lose. Orlando is nearing the age that service dogs must retire." (Via WLNY)

You might have noticed Orlando's graying muzzle. He's 10 years old, and Williams told reporters his insurance soon won't cover the cost of caring for him. (Via New York Daily News)

WLNY reported Wednesday morning calls to help pay for Orlando to stay with Williams weren't just pouring in — one Tribeca neighborhood man offered to pay the entire cost for the dog.