How A Man With Quadriplegia Moved His Arm Again 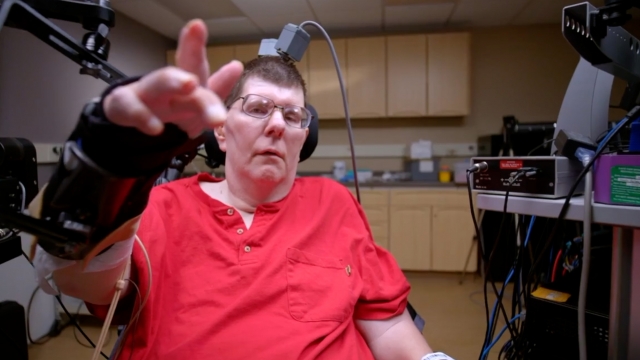 Researchers call it the first study of its kind.

A man with quadriplegia was able to move his hand and arm again with his thoughts; temporary implant technology made it possible.

Bill Kochevar was in a bicycle accident eight years ago that severely injured his spinal cord, paralyzing him from the shoulders down.

He's worked with Case Western Reserve University researchers since 2014 and was recently able to eat and drink on his own.

"Well, it was amazing because I thought about moving my arm, and it did. I can move it in and out, and up and down," Kochevar said.

A new study argues that diet, rather than social behaviors, led to our large brains.

The study's lead researcher said: "We've been able to take the electrical signals, which represent his thoughts, and use that to control stimulation of his arm and his hand."

Two electrodes about the size of small aspirin were planted on the surface of his brain's motor cortex. When he imagined moving his arm, that electrical information was recorded and passed to a stimulation system connected to his arm and hand.

Kochevar's arm was held in a sling to resist gravity, but his mind also controlled the sling's movements.

The tech still has a very slight delay, and Kochevar can't feel his limbs moving. But researchers say this is just the beginning.

"We're just at the forefront of really understanding how the brain functions, how to take advantage of our knowledge and could see exponential growth," the study's lead researcher said.

Even now, Kochevar said the technology he used in tests helps people with quadriplegia rely less on caregivers.

"It's not like my life stopped when I got injured. It's going to help out a lot more people for years to come," Kochevar said.