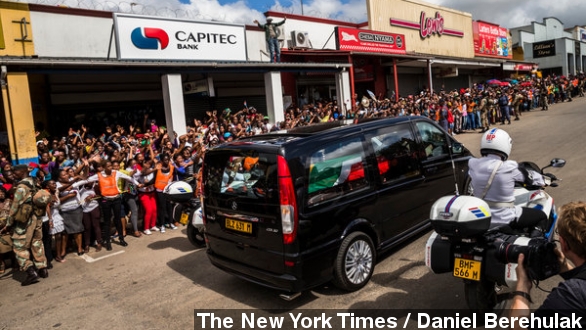 ​Thousands lined the streets of Nelson Mandela's ancestral village Saturday to welcome home the body of their beloved leader.

​Thousands lined the streets of Nelson Mandela's ancestral village Saturday to welcome home the body of their beloved leader.

Waving South African flags and chanting his name, they bid their final goodbye in Qunu, the small village where Mandela spent much of his childhood. (Via BBC)

Meanwhile, construction workers scrambled to finish building an arena where the funeral will be held. Qunu's famous son will be laid to rest on a farm behind the pink house he built after his release from prison. (Via CNN)

Mandela's body had laid in state in Pretoria for three days in the same amphitheater where he was sworn in as South Africa's first black president back in 1994. (Via Fox News)

Then the country's military handed over his body, draped in the South African flag, to members of the African National Congress on Saturday before it was taken by motorcade to Qunu. (Via Sky News)

While the memorial service saw tens of thousands of people, the funeral will be a much smaller affair with about 5,000 in attendance. Mostly family will attend the burial. (Via Euronews)

Notably absent from the list of those expected to attend is Mandela's close friend retired Archbishop Desmond Tutu. He's criticized the African National Congress government in the past and says he didn't receive an invite to the funeral. A government spokesperson denied the snub. (Via MSNBC)

According to Al Jazeera, several tribal traditions will be observed during the funeral and burial, including the slaughtering of an ox.

Throughout the ceremony, Mandela will be referred to by his clan name, Dalibhunga — the name given to him when he turned 16.