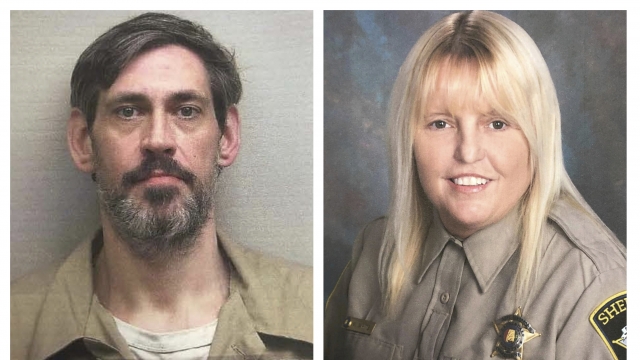 The sheriff said the Ford Edge with distinctive burnt orange paint was found on a roadside and towed the same day that Casey and Vicky disappeared.

Lauderdale County Sheriff, Rick Singleton said Vicky, who is no longer employed by the sheriff's office, was second-in-command at the jail, a 17-year veteran, who had earned an "exemplary" reputation.

Singleton said Vicky and inmate Casey are not related but reportedly had a "jailhouse romance" that led to her helping the 38-year-old inmate escape.

Vicky told co-workers she was taking the inmate for a mental health evaluation. Investigators later determined no such appointment existed.

Investigators say the pair then switched into an orange Ford Edge, which was recovered May 6 at a Williamson County, Tennessee tow lot, about two hours north of Florence. Investigators say the getaway vehicle was taken to the tow lot after it was found abandoned in the woods.

The vehicle used by escaped Alabama inmate Casey White and former Correctional Officer Vicky White has been located in Williamson Co in Bethesda. There is NO sign the two are still in our area. The SUV was reported abandoned a week ago. It was identified last night @WCSO_Sheriff pic.twitter.com/LPa1IWE80x

"They probably had mechanical problems with it because it was found out in the middle of nowhere on the side of a county road where it would obviously be found," said Singleton.

From there, investigators don't know if the pair stole another vehicle or caught a ride. Singleton says Vicky's extensive law enforcement knowledge has given the pair a leg up from day one.

"It's not the Vicky White we know, but obviously there was a side to Vicky White that we weren't aware of. And she has coordinated this and taken advantage of her knowledge of the system and played it to her advantage and it's made it very difficult," said Singleton.

Authorities say White sold her house last month, withdrew $90,000 dollars in cash days before going on the run, and had also submitted retirement paperwork. Singleton says the day of the escape was set to be Vicky's last day of work.

Officials say Vicky may have altered her appearance, and changed her hair color, but it's difficult for Casey to alter his.

Investigators say Casey has several tattoo's, including two eyes on the back of his head, and he's also 6 feet, 9 inches.

The U.S. Marshall's Service says the pair is likely armed and should be considered dangerous.