Taking A Look At Manipulated Images On Social Media 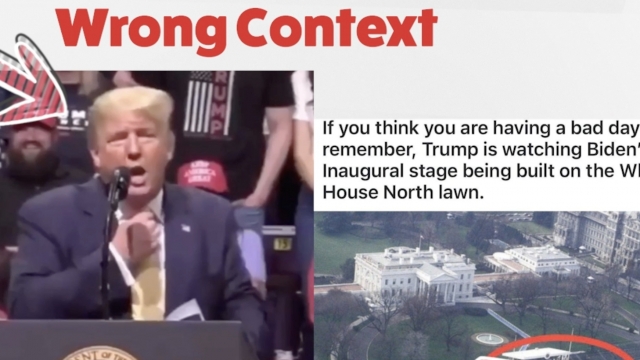 It may seem clear to you that this image has been doctored -- cut together from images of Barack Obama and David Cameron kissing their spouses.

But out on the internet, not everyone will see it that way.

Newsy looked through thousands of flagged posts and saw all sorts of misinformation. Much of it was manipulated content -- something that started off real but was later changed in some way to convey incorrect information.

Some of those were doctored photos that were presented as real. For example, fake photos of people hanging out with convicted sex offenders Jeffery Epstein and Harvey Weinstein, or altered documents.

But many more were photos that weren't doctored, but they weren't what the poster claimed. Like this photo: Dr. Anthony Fauci and Obama supposedly visiting "the Wuhan lab" in 2015 with Melinda Gates.

The photo is "real" -- it comes from the NIH. But that's not Wuhan, it's Maryland. And that's not even Melinda Gates.

And don't think a post isn't manipulated just because it has numbers in it. The person who posted this map said it showed the number of missing children by county in Ohio last year.

This is real data that really comes from the Ohio Attorney General's office. But it actually shows missing children reports, and that's misleading.

There were 20,000 reports in 2018, but less than 2% of those children were still missing when the report was published. Nearly all of them were "safely recovered" that year.

Unfortunately, we can't rely on just Facebook's fact-checking partners to ward off misinformation. Only a small fraction of the millions of posts circulating every day on the platform can be checked.

According to the News Literacy Project, consumers should keep an eye on where a piece of information is coming from. Is it a reputable outlet? Are other news organizations reporting similar information? Where did an image or video first appear?

Misinformation often plays upon emotional responses. So if a questionable bit of information makes you feel outraged, it may be manipulated content trying to manipulate you.