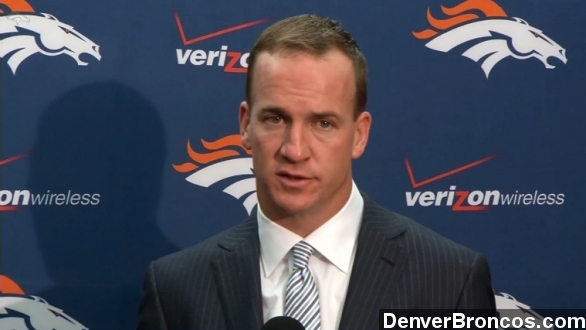 Peyton Manning is on the verge of having his single season passing yards record called back, according to a report.

By the end of Week 17, we were all sure that Peyton Manning was the new single season passing yards record holder.

The Broncos quarterback beat out Drew Brees and all other NFL quarterbacks to ever play the game with 5,477 passing yards in the 2013 regular season. (Via KWGN)

But now, according to Sports Illustrated, the NFL isn't so sure.

According to SI.com, "... it’s possible that when the league reviews the Denver Broncos’ 34-14 win over the Oakland Raiders on Sunday, Peyton Manning’s single season yardage record could be in a bit of danger."

The ruling on the field was a seven-yard pass completion, but on this pass to Eric Decker late in the first quarter, it looks like Manning throws a lateral. Laterals technically count as rushing plays, which would take the seven yards from Manning and give them to Decker. (Via Sports Grid)

That places Manning at 5,470 yards, which is six yards shy of the record set during the 2011 season by Drew Brees.

The NFL works with Elias Sports Bureau to review plays throughout the season, and according to ESPN, "teams are often notified in the days following games of corrections in items such as sacks or rushing and passing yardage."

And to make matters worse, Manning didn't touch the field the entire second half.

As one Denver Post reporter points out, "... Manning could have thrown for 500 if he wanted."

But Peyton Manning and the Broncos have nothing to hang their heads about, record or not.

With one game left in the season, Manning broke the all time record for touchdown passes with 55. He also led the Broncos to break the all-time record for points in a single season, at 606.

And as one writer points out, Manning would "likely trade it all for a second Lombardi Trophy." ​(Via Bleacher Report)