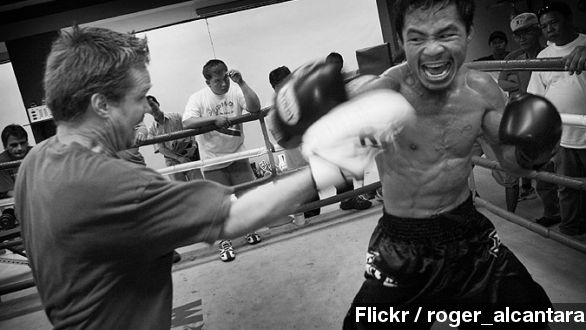 The boxer's bank accounts are frozen as the Philippines government attempts to collect $50 million in back taxes.

Boxer Manny Pacquiao promised to help victims of Typhoon Haiyan — and he kept that promise. But the prizefighter and Filipino congressman has revealed he had to borrow money to make it happen after the government froze his bank accounts.

"Despite returning like a hero from beating Brandon Rios over the weekend, the Bureau of Internal Revenues says Pacquiao hasn't proved he paid taxes in 2008 and 2009." (Via BBC)

Pacquiao's defense — he *did* pay taxes — in the U.S. And that a treaty between the two countries protects dual citizens like him from double taxation.

Pacquiao says he borrowed nearly $23,000 to make good on his typhoon-relief pledge — and that he plans to borrow more in his effort to help more than 10,000 families. (Via Al Jazeera)

ESPN reports the Philippines dropped a criminal unpaid-taxes case against the boxer in 2010, but continues to pursue the previous claims — totaling $50 million between 2008 and 2009.

According to Sky News, the Philippines government "has been running an active campaign against high-profile tax evaders, targeting movie stars as well as businessmen."

The Philippines government says it has been waiting for the IRS to provide Pacquiao's tax documents for two years.