Many Americans Oppose US Decision To Move Embassy To Jerusalem 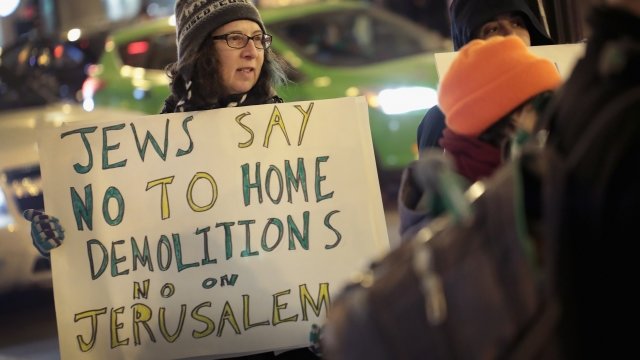 Ambassador Nikki Haley says Americans want to move the U.S. Embassy to Jerusalem — but that's not really the case.

As 128 countries in the United Nations condemned the United States' decision to move its Israel Embassy to Jerusalem, U.S. Ambassador to the U.N. Nikki Haley said the U.S. was acting on what Americans want.

"America will put our embassy in Jerusalem," Haley said. "That is what the American people want us to do."

But that might not quite be the case: A recently released poll from the University of Maryland reports that 63 percent of the Americans surveyed oppose moving the embassy to Jerusalem.

In the Jewish-American community, the amount of support is even lower.

According to the American Jewish Committee's 2017 Survey of American Jewish Opinion, only 16 percent of those surveyed supported moving the embassy to Jerusalem immediately.

A statement signed by almost 170 Jewish Studies scholars argues the U.S.' declaration "is practically guaranteed to fan the flames of violence."

The move is slightly more popular with the evangelical Christians who make up part of President Trump's base: 53 percent of them support moving the embassy.