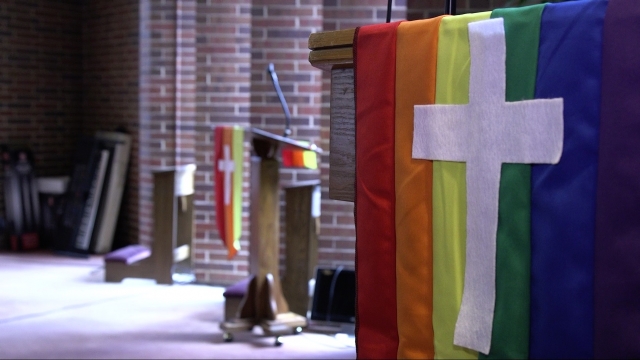 U.S. Catholics support same-sex marriage more so than the national average, according to a 2006-2020 Gallup poll.

The Catholic Church isn't known for welcoming the LGBTQ community and the church as a whole is still officially homophobic... describing gay relationships as "deviant behavior."

But here in Chicago's rainbow neighborhood of Northalsted you'll find two LGBTQ communities that have been practicing Catholicism for decades. In this space, we spoke with parishioners of AGLO, the Archdiocesan Gay and Lesbian Outreach.

"I feel like my relationship with God actually grew stronger by coming out just because I was able to just be myself authentically," says AGLO member Brent Taghap.

In this service, a Catholic priest celebrates mass in a church full of LGBTQ community. Publicly AGLO doesn’t dispute church teachings, but privately some of the members are hoping to change the homophobic rhetoic from the larger Catholic community.

"My part of the Catholic Church, and you heard it tonight, God is love, I mean, it's not that judgment," says AGLO member Brian Smith.

According to the Gallup Poll, from 2016 to 2020 U.S. Catholics support same-sex marriage more so than the national average.

"Through baptism we become a member of the church and no one can take that away from you," says AGLO outreach director Joe Vitek.

Originally, AGLO was part of a larger LGBTQ Catholic group called Dignity, but in the late 1980s Dignity challenged the Vatican's stance on homosexuality and was forced out of the church. Now, they hold mass inside a Methodist church just around the corner.

"The core of our mission is to is to affirm same-sex relationships as being Life-Giving and life affirming," says Steve Forst, president of Dignity Chicago.

Rolenc is an unrecognized priest by the Catholic Church standards, but she’s accepted at Dignity. She preaches and recognizes this LGBTQ community, that's been largely ostracized by the Church. "You have to truly believe that you've done nothing wrong. You are a blessing from God," says Rolenc.

Dignity and Aglo differ in their response to church rulings that homosexuality and same-sex marriage are sinful, but there's no animosity between both organizations.

"We're very much both Catholic communities of faith. ... but from different perspectives,"  said Vitek.