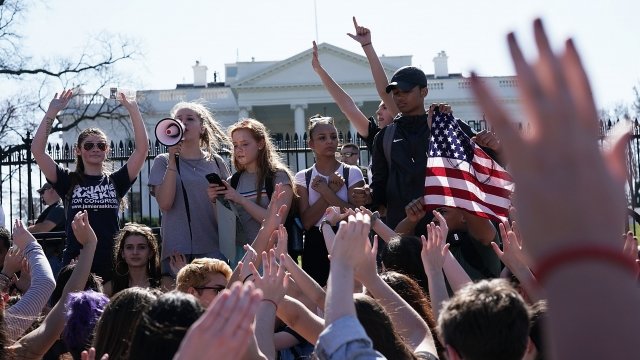 Student protesters have been called "rabble rousers" and "crisis actors," but that criticism isn't going to stop their work.

Since the early 1900s, kids and teens have led protests against child labor, voter disenfranchisement and the Vietnam War. They've fought to promote the rights of women, people of color, members of the LGBTQ community and undocumented immigrants. Now, students across the country are focusing their efforts on another cause: school safety and gun reform.

Countless outlets are saying the student survivors of the school shooting in Parkland, Florida, are changing the debate around gun reform.

That shouldn't come as a surprise. A media expert from the Massachusetts Institute of Technology and Harvard University wrote in 2012: "Young people are often key actors in powerful social movements that transform the course of human history."

CNN reports students at schools in Tanzania, Iceland, the U.K. and Israel participated in the National School Walkout.

Student-led protests are ingrained in American history. One of the most recent — and contentious — ones took place at the University of Missouri.

Spurred by a string of racially motivated harassment incidents, the activist group Concerned Student 1950 led the protests for racial inclusion. The student-led protest gained support from dozens of other campuses across the country and sparked a national conversation about systemic racism.

In 1960, decades before those protests, four freshmen at North Carolina A&T State University staged a sit-in at a whites-only lunch counter. Their action — in protest of segregation — similarly inspired hundreds of other student protests across the country at the time.

That same year, inspired by the civil rights movement, young activists formed Students for a Democratic Society, a national anti-war organization that sought to find alternatives to polices from the Cold War era.

We Spoke With High Schoolers About Gun Control. Here's What They Said.

They led a "die-in" protest in front of the White House on Presidents Day.

The national school walkouts and March for Our Lives? Those likely won't be any different.