Former Ambassador Says There Was A 'Concerted Campaign' To Fire Her 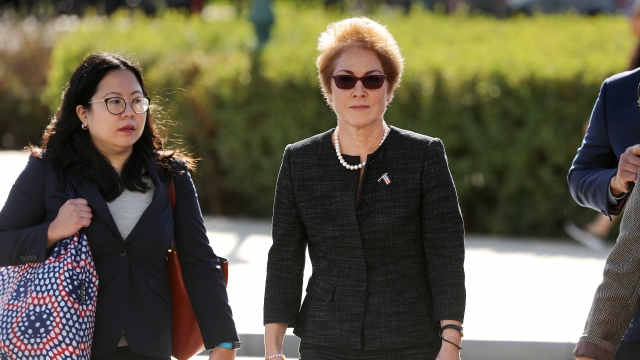 Marie Yovanovitch met with members of the House Committees on Intelligence, Oversight and Foreign Affairs as part of the impeachment inquiry.

The former U.S. ambassador to Ukraine spoke to lawmakers behind closed doors Friday as part of the House's impeachment investigation.

Marie Yovanovitch met with members of the House Committees on Intelligence, Oversight and Foreign Affairs.

Multiple media outlets got a copy of her opening statement. In it, she talks about the work she did during her 30-plus years as a foreign service officer, and her unceremonious ouster from the State Department.

She said the Deputy Secretary of State who recalled her from Ukraine also told her she had done nothing wrong. In her statement, she said she was told a "concerted campaign" against her had been ongoing for months. Yovanovitch said that she lost her job because of "unfounded and false claims by people with clearly questionable motives."

Those claims include accusations she openly criticized President Donald Trump and tried to protect the Bidens from Ukrainian investigations.

Yovanovitch is the second key State Department official to talk to the trio of House committees. Kurt Volker, another former U.S. official for Ukraine, testified behind closed doors last Thursday.