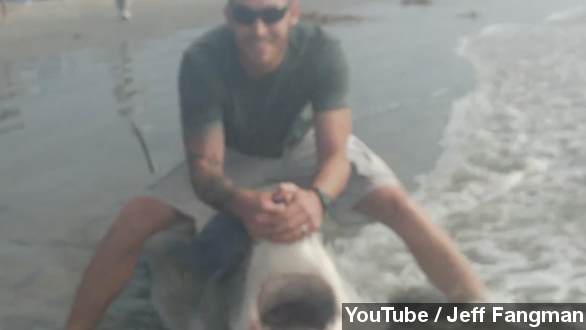 A Marine became the first person ever recorded to catch a great white shark while fishing from land in the U.S.

A marine might have done something that nobody else has done before.

The video, taken by Fangman's wife, was shot back in October when the catch happened, but now the video and story are making their way onto national news programs.

"I like it. His name is Fangman — like Fangman vs. the shark there. I'll go with the Fangman on that one. Well done, sir!" (Via CNN)

Fishing for sharks is nothing special for Fangman — he's been doing it for years. But he told San Diego's KGTV he's never caught a great white before.

"The line actually started just rolling off the reel. Lo and behold, it ended up being a great white. It was almost mind-blowing. It's taken several weeks for the whole ordeal to sink in."

And that's what makes his catch so special: Seemingly, nobody's ever caught a great white from a beach in the U.S. If they have, it's never been recorded.

People catch other sharks all the time off beaches. Some of the more usual culprits are bull sharks, tiger sharks, lemon, sandbar and even the occasional hammerhead. (Via YouTube / Andrew Benak)

Fangman didn't really catch Jaws or anything, though. The great white he caught was a small female. Fangman wasn't able to keep his big catch because great whites are illegal for fishermen to target and must be released.