The Marine Corps Is Expecting Its First Female Infantry Officer 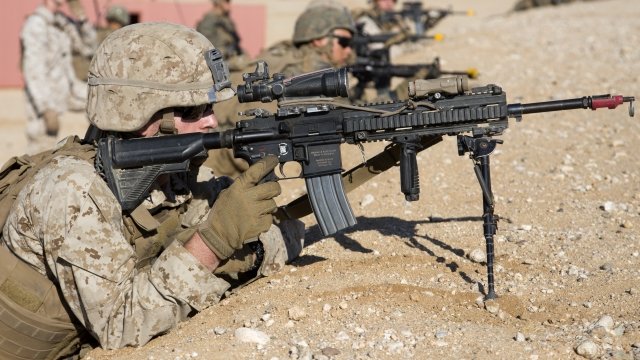 Service officials told The Washington Post the woman is expected to graduate from the Infantry Officer Course on Monday.

The U.S. Marine Corps is gearing up to have its first female infantry officer.

Barring any unexpected circumstances, service officials told The Washington Post the woman will lead a platoon of around 40 Marines after she graduates from the Infantry Officer Course on Monday.

The 13-week course is commonly referred to as "grueling." Candidates must tackle a series of tactical-movement exercises to graduate. Exercises include hikes between 6.4 and 9.3 miles while carrying a load ranging from 96 to 150 pounds. On average, about 25 percent of candidates fail the course.

The woman — whose name has not been released — is one of 36 female candidates to attempt the course. None of the others completed it.

The Marine Corps first offered its Infantry Officer Course to women in 2012 as part of an experiment looking at which roles it could open up to female Marines. After no women passed, the service ended the trial period in the spring of 2015.

Mattis is creating a panel of experts to determine how the military should put President Donald Trump's new transgender guidelines into effect.

The Marine Corps was forced to reopen the course to women after the Obama administration announced in late 2015 it was opening all military roles to women.

Since then, women have achieved firsts across multiple U.S. military branches.