Marine Dies In Parachute Accident On Vacation Won On 'Ellen' 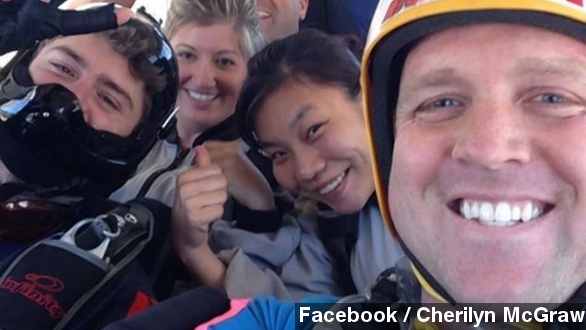 A 33-year-old Marine is dead after a freak parachute accident during a dream vacation his wife won on "The Ellen DeGeneres Show."

A North Carolina woman lost her Marine husband in a freak parachute accident during a dream vacation to Australia that went terribly wrong.

Cherilyn McGraw and her husband Brandon decided to go skydiving together Saturday while enjoying an all-expenses paid trip to Australia that she had won on "The Ellen DeGeneres Show." (Via WCTI)

According to New York Daily News, Brandon watched Cherilyn safely jump with an instructor first then leapt on his own.

But suddenly, when he was trying to land, he started swerving and slammed into the ground.

"The marine, stationed at Camp Lejeune, was a certified parachutist. Police say his chute opened, but something happened that caused him to crash." (Via WECT)

By the time emergency responders arrived on the scene, Brandon was in cardiac arrest. Paramedics weren't able to revive him, and he was pronounced dead just a few minutes later. (Via Daily Mail)

The official cause of the accident hasn't been released, but Australian news outlets say high winds in the area may have had something to do with the accident. (Via The Sydney Morning Herald)

According to several media outlets, Cherilyn thanked all of those supporting her through this tragedy in a Facebook message that read, "My hero. My angel... I love you more than anything in the world, honey. You are the most amazing man." Her page has since been made private. (Via E!)

No word from Ellen's camp on the tragic accident.