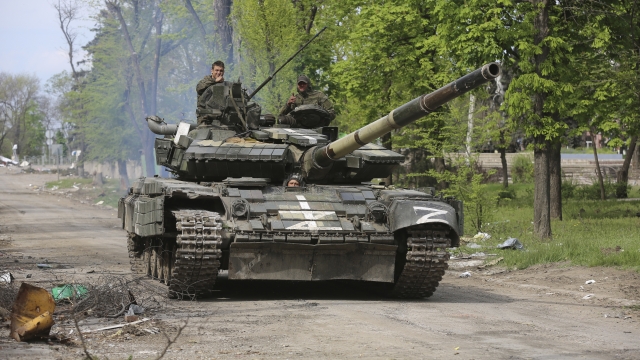 Heavy fighting continues at a steel mill in the port city of Mariupol, where Ukrainian troops and civilians are trapped by a Russian bombardment.

Ukraine's military said Thursday that it recaptured some areas in the south and repelled Russian attacks in the east, as a bloody battle raged at a steel mill in Mariupol where Ukrainian troops are holed up in tunnels and bunkers, fending off a Russian onslaught.

Ten weeks into a devastating war, Ukrainian and Russian forces are fighting village by village, as Moscow struggles to gain momentum in the eastern industrial heartland of the Donbas. Russia switched its focus to that region — where Moscow-backed separatists have fought Ukrainian forces for years — after a stiffer-than-expected resistance bogged its troops down and thwarted its initial goal of overrunning the capital.

In addition to heavy shelling of the Donbas, Russian forces also kept up their bombardment of railroad stations and other supply-line targets across the country — part of an effort to disrupt the supply of Western arms, which have been critical to Ukraine's defense.

In the most searing example of how Ukrainian forces have slowed Russia's progress, Ukrainian fighters held out at the sprawling Azovstal steel mill in Mariupol — the last pocket of resistance in a city that is otherwise controlled by Moscow's forces.

Brian Murphy tells Newsy there's much more that the inspector general's office should investigate beyond his 2020 allegation.

“With the support of aircraft, the enemy resumed the offensive in order to take control of the plant,” the Ukrainian military's General Staff said Thursday. A stream of black smoke rose above the plant on Wednesday.

The Ukrainians said Russian forces have pushed into the plant’s perimeter and were also bombing it from above. The Kremlin denied that there was any ground assault.

Mariupol’s fall would deprive Ukraine of a vital port, allow Russia to establish a land corridor to the Crimean Peninsula, which it seized from Ukraine in 2014, and free up troops to fight elsewhere in the Donbas.

The city, and the plant in particular, have come to symbolize the misery inflicted by the war. The Russians have pulverized most of Mariupol in a two-month siege that has trapped civilians with little food, water, medicine or heat. Civilians holed up inside the plant have perhaps suffered even more. About 100 of them were evacuated over the weekend — the first time some saw daylight in months.

The Russian government said it would open another evacuation corridor from the plant during certain hours on Thursday through Saturday. But there was no immediate confirmation of those arrangements from other parties, and many previous assurances from the Kremlin have fallen through, with the Ukrainians blaming continued fighting by the Russians.

It is unclear how many Ukrainian fighters are still inside the plant, but the Russians put the number at about 2,000 in recent weeks, and 500 were reported to be wounded. A few hundred civilians also remain there, the Ukrainian side said this week.