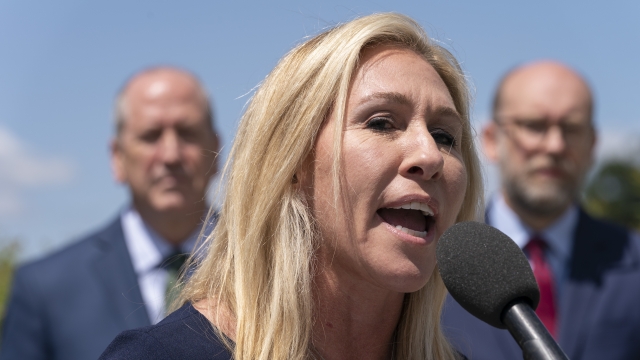 Greene spoke to reporters in a news conference at the holocaust memorial museum.

Rep. Marjorie Taylor Greene has apologized weeks after comparing the requirement of having to wear a mask on the House floor to rules that required Jews to wear gold stars during the Holocaust.

The Georgia Republican's rare apology came after those comments her remarks on a conservative podcast were condemned by lawmakers on both sides of the aisle.

As House members returned to the Capitol Monday after a three-week break, Greene spoke to reporters in a news conference at the United States Holocaust Memorial Museum.

"There is no comparison to the Holocaust," she said. "There are words that I have said and remarks that I've made that I know are offensive. And for that I want to apologize."

Democratic Rep. Brad Schneider of Illinois said he would introduce a resolution in the house this week to censure Greene.

And Rep. Ilhan Omar of Minnesota is facing a censure introduced by Republicans yesterday. The Democrat recently tweeted, comparing the U.S. and Israel to Hamas and the Taliban. Her comments were criticized by top House Democrats and Jewish lawmakers. Omar said she didn't mean to use the comparison and later clarified her comments.