Mark Zuckerberg Gave The Pope A Drone Model As A Gift 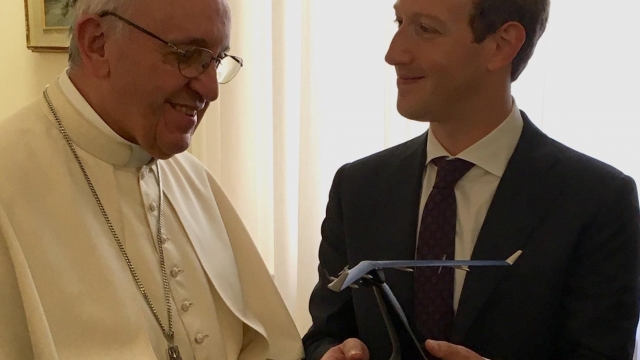 Zuckerberg was in the area for a Facebook Q&A in Rome.

It's not everyday you get to meet a pope, but for those who have the honor, what exactly do you get the pope as a gift?

Well, Mark Zuckerberg chose to give Pope Francis a drone — or at least, a model of one.

SEE MORE: Facebook Is Working To Rid Your News Feed Of Clickbait

It's actually a pretty thoughtful gift, judging by what the founder and CEO of Facebook shared on his page.

Zuckerberg wrote: "We shared our work with the Chan Zuckerberg Initiative to help people around the world. It was a meeting we'll never forget. You can feel his warmth and kindness, and how deeply he cares about helping people."

The model of the Aquila was tied to the men's discussion about "connecting people, especially in parts of the world without internet access." The solar powered aircraft aims to beam internet to places that don't have it.

Facebook announced the drone's first test flight this summer. Pope Francis just got a model of it.

Zuckerberg was in the area for a Facebook Q&A in Rome on Monday and expressed his condolences for those dealing with the aftermath of last week's deadly earthquake in the country.

"The spirit of the people here in Italy that 'We're going to get through this. We're going to rebuild, and it's going to take a while. But you're going to make it happen,' I think, is really inspiring to people all around the world," Zuckerberg said.

He started the Q&A by saying, "Our hearts go out to all of the people who have lost a home or have lost a loved one or know someone who was affected by the earthquake. Really hard to imagine what it's like to, in an instant, have your whole life turned upside down."