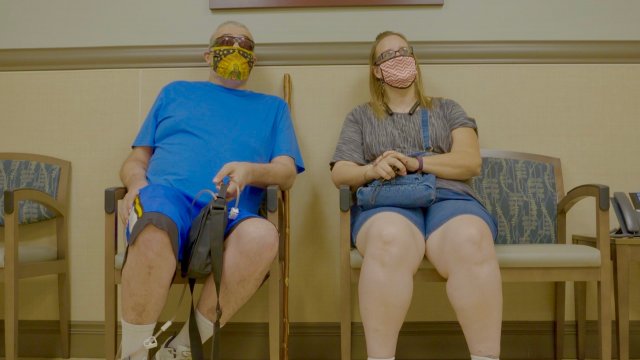 Miguel and Tamie Rivera both ended up in the ICU for COVID-19, but their cases have been very different.

It started in March when Tamie got sick. Stomach problems and fever led her to a short stay in the intensive care unit at North Suburban Medical Center in Thornton, Colorado. She recovered quickly with care and extra oxygen.

But while Tamie was still in the hospital, Miguel started to develop symptoms.

"I had a temperature of one hundred three point nine," he said.

"My dad would tell me, well, I don't want to leave you home alone because it's just us three here," the couple's son, Miguel, said.

Stubborn, Miguel waited to get care. When he finally went to the ER, he tested positive for COVID-19. His oxygen levels were so low, in a few hours, he was on a ventilator.  He stayed in the ICU, on a ventilator, for five weeks.

"What we still just don't understand about it is why it affects some people more severely than others," said Dr. Steven Purtle, a pulmonary critical care physician at North Suburban Medical Center.

Recovering is also looking dramatically different for these two, who are both in their 50s.

"I didn't sleep a lot. I had major chunks of hair that started falling out. And so my hair thinned drastically," Tamie said.

Miguel’s recovery will take much longer than Tamie’s. He has regular appointments to nurse pressure wounds from being on his stomach on the vent from the ICU. He uses a cane as he builds back his strength.

"He would get lightheaded quite often to where he would want to pass out. He gets his own breakfast now. You know, he's able to dress himself and do things like that. So those are all things that he has improved on his own," Tamie said.

But for these two, their partnership helps. Tamie takes his blood pressure and oxygen levels. She knows the importance. They’re slowly getting more active, too.

"We go for walks on a daily basis. We're up to two blocks now," she added.

All in all, as differently awful as the coronavirus has been for them, Tamie and Miguel Rivera say, it’s actually made their marriage stronger.

"Just because we've come through so many different, you know, settings. Us being separated for such a long time. And then, you know, coming back together," Tamie said.