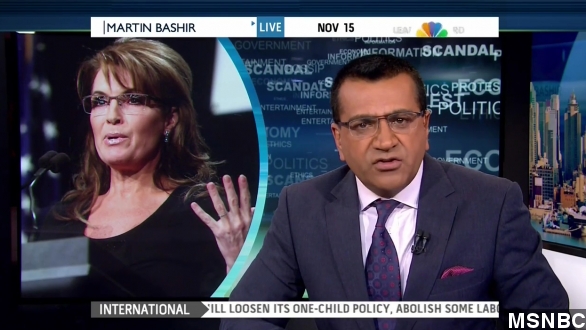 MSNBC host Martin Bashir resigned from the company after he suggested someone should defecate in Sarah Palin's mouth.

MSNBC's Martin Bashir has resigned more than two weeks after this:

" ... had him well flogged and pickled, then made Hector, another slave, s-h-i-t in his mouth." (Via MSNBC)

In on-air commentary about former Alaska Gov. Sarah Palin, the now-former MSNBC host brought up an appalling form of punishment a British slave owner used on his slaves.

"If anyone truly qualified for a dose of discipline from Thomas Thistlewood, then she would be the outstanding candidate."

"She" being Palin. Yes, he suggested someone defecate in Sarah Palin's mouth, which he apologized for but which earned him criticism from many who also questioned whether Bashir's network would punish the host. (Via Fox News)

Wednesday afternoon Mediaite got confirmation the host was resigning. Bashir emailed the blog this statement, "It is my sincere hope that all of my colleagues ... will be allowed to focus on the issues that matter without the distraction of myself or my ill-judged comments."

In response, MSNBC President Phil Griffin in a statement thanked Bashir for his three years at the network, and called him a "good man and respected colleague."

At least one person happy about the resignation? Reality star and Fox News regular Donald Trump, who posted this on his Instagram account.

"Martin Bashir, you're a total loser. You're fired."

Bashir wasn't on air Monday, though it was at the time billed as the host being "on vacation."

Last week MSNBC announced it was parting ways with new host Alec Baldwin, who had made homophobic comments to a New York Post photographer.