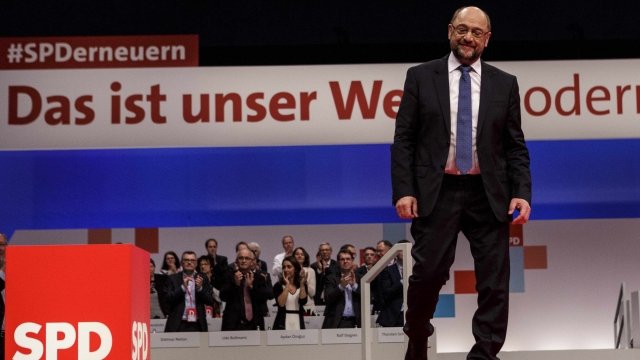 Germany's Social Democratic Party voted to negotiate with Angela Merkel's government Thursday. But the party's leader has a pretty lofty goal that could get in the way of talks.

Before the vote, Martin Schulz — head of the SPD — told his party's members he wanted to see a "United States of Europe" by 2025. That vision for Europe's future is pretty different from Merkel's — not to mention European voters — more cautious approach to European Union reform.

Anyone who wouldn't accept the stronger union would be forced to leave the EU, which is already set to lose one member due to Brexit.

Schulz mentioned a few other policy goals in his speech, too. He called for stronger social security, more money to schools and binding green energy targets.

British Prime Minister Theresa May and EU Commission President Jean-Claude Juncker admitted they had some differences on a "couple of issues."

And based on the number of issues Merkel and Schulz disagree on, the coalition talks could go on for a while.