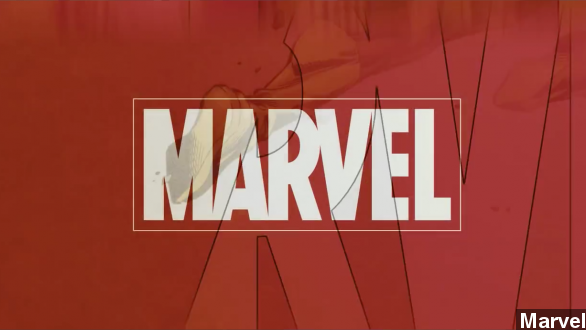 Netflix announced Thursday Marvel will create four original superhero series for the streaming service. Starting in 2015, each series will focus on a different hero, including Daredevil.

It's a team that could be described as super — Netflix and Marvel. The two companies announced Thursday Marvel will develop four live-action superhero series exclusively for the streaming service.

The first of the four series will air in 2015 and focus on Daredevil, who you might remember from that 2003 Ben Affleck film. (Via 20th Century Fox / "Daredevil")

Following him, superheroes Jessica Jones, Iron Fist and Luke Cage will all get 13-episode storylines. (Via Marvel)

In true Marvel fashion, the four characters' journeys will end in a miniseries that brings them all together. That's called "The Aveng—" I mean, "The Defenders" — another established superhero collective in the Marvel universe. (Via Disney / "The Avengers")

A writer for The Verge doesn't mince words, calling this deal huge for both companies.

"It's Marvel's biggest venture into television series yet, and it's one of Netflix's biggest commitments as well, and one that's certain to draw quite a few eyes."

But don't expect "The Defenders" series to look like "S.H.I.E.L.D."

Content aside, Marvel's president for entertainment says these exclusive series will bring fans a new way of viewing.

"This serialized epic expands the narrative possibilities of on-demand television and gives fans the flexibility to immerse themselves how and when they want in what's sure to be a thrilling and engaging adventure."

For its part, Netflix sees this as yet another way it's shaking up the content industry. Oh and, giving you more of the characters you know.

Remember over the summer when Netflix announced this? It struck a deal with Dreamworks to produce 300-plus hours of original programming with Dreamworks characters. (Via Variety)

The Marvel move also makes sense for Netflix because, as the company's chief content officer said, both "Iron Man" and "The Avengers" are "huge favorites on our service around the world." (Via Paramount Pictures / "Iron Man")