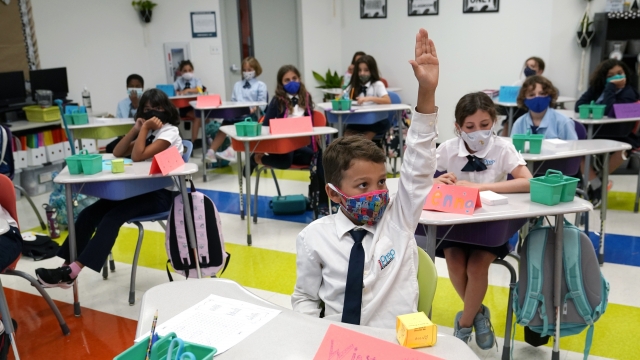 A legal battle over mask mandates is taking yet another turn in Florida.

Florida leaders previously put in place rules that require school districts let parents opt out of mask requirements. A judge in Tallahassee previously ruled that wasn’t constitutional, blocking the state rule and allowing districts to have stricter mandates. When the state took steps to appeal, a stay was triggered.

The same judge granted an emergency motion to vacate the stay Wednesday. It allows the judge’s order to remain while the legal process plays out.

“No surprise here that Judge Cooper concluded that he is unlikely to be overruled on appeal. We (unsurprisingly) disagree. Today we plan to file our emergency motion to reinstate the stay, and we anticipate the appellate court will rule quickly, much like during the school re-opening case last year,” Governor Ron Desantis’ communications director said in a statement.

One parent and plaintiff involved in the case said the ruling was a relief.

“My kid is not a political pawn right. And he should not be used as one just like no one else’s kid should be and that is really what’s happening in this is it’s really a game of politics and we’re not really doing what’s best for our kids and the fact that we have to fight our government to say look let us keep our kids safe let us educate our kids in a safe environment is really really frustrating,” said Damaris Allen.

The Florida Education Association counts a total of more than 156,000 quarantines of staff and students since Aug. 1st based off of data from district’s COVID19 dashboards.

School districts in some of the state’s largest cities had already started defying the state by passing mandates that allow medical exemptions, but not parent opt-outs. School boards in Alachua and Broward Counties both are facing withholdings from school board member’s salaries as a consequence.

"Judge Cooper's ruling is certainly good news. It confirms that our School Board members should not be penalized for approving our mask policy--a policy that follows both the law and medical science. We'll continue to watch this case closely while pursuing legal action with our colleagues from the Broward and Orange County school systems. We are committed to protecting the district's right to meet the needs of students and staff without the threat of sanctions,” stated Alachua County Public Schools' Superintendent Dr. Carlee Simon in a released statement.

Alachua, Broward and Orange County Schools have requested a hearing in an effort to invalidate a Florida Department of Health emergency rule requiring parents be allowed to opt out of mask mandates.