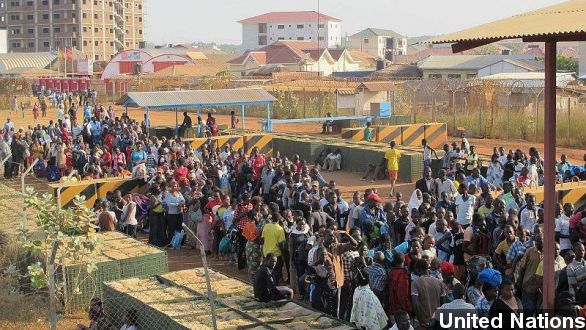 The United Nations said three mass graves have been discovered in South Sudan, adding to fears the country may slip into civil war.

​The United Nations says three mass graves have been discovered in South Sudan — raising fears the world’s newest country could be on the verge of civil war.

The fighting erupted just over a week ago when President Salva Kiir said forces loyal to his former vice-president Riek Machar attempted a coup. (Via South Sudan TV)

Tuesday, the U.N. announced dozens of bodies had been discovered at one burial site, and there were reports of two other mass graves in the capital city of Juba — a city that's quickly descended into violence in the past ten days— with hundreds reported dead, and tens of thousands displaced. The discovery of mass graves is adding to the concern those numbers will keep growing. (Via United Nations, ENCA)

The announcement comes as the two sides of the conflict continue to break along ethnic lines — with the Dinka, the country's largest ethnic group, mostly supporting the president, and the Muer, the second-biggest group, supporting his former deputy. The fear is that further infighting could spark a nation-wide ethnic conflict. (Via Wikimedia Commons / Jenny Rockett, Wikimedia Commons / Voice of America)

And South Sudan, sadly, is used to conflict. It went through a two-decade long civil war that ended with more than a million people dead before the South split off from the North back in 2011. (Via Enough Project)

The Washington Post’s Max Fisher explains what resulted were rivalries within the new country. “Splitting Sudan in two helped to ease the tension created by these borders but didn't solve it. The southern ethnic groups had been united by a common enemy -- the north -- but that's no longer bringing them together.”

This weekend four U.S. troops were injured in South Sudan when gunfire hit their aircraft. About 150 U.S. marines are reportedly poised to enter the country to help protect the American embassy.