One Of The Biggest Icebergs Ever Has Broken Away From Antarctica 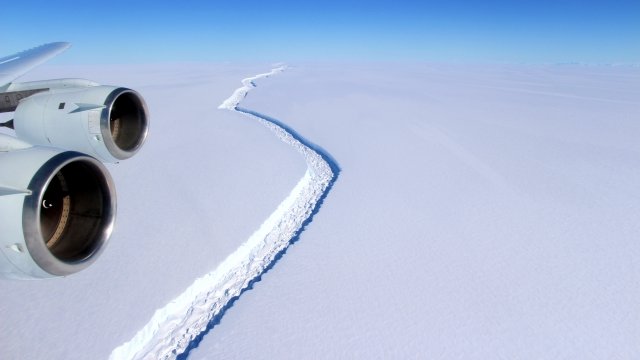 A massive iceberg the size of Delaware has broken away from Antarctica.

Scientists had been waiting for this to happen for a while.

Researchers had been monitoring a big crack in the ice shelf for more than a decade.

Scientists think strong El Niños, like the one that melted so much surface ice in Antarctica last year, will become more common in the future.

That crack grew dramatically at the end of last year. And by January, the 2,000-square-mile section of the ice sheet was hanging on by a thread.

This new iceberg won't make sea levels rise because it was already floating. Think of it like ice floating in a glass of water. The Larsen C ice shelf is attached to Antarctica, but the section that broke away wasn't.

But the Larsen C shelf prevents other glaciers from getting to the ocean. And if the whole thing breaks up, those glaciers could contribute to rising sea levels.

Scientists say the newly split iceberg is one of the biggest ever recorded. Its volume is double that of Lake Erie.