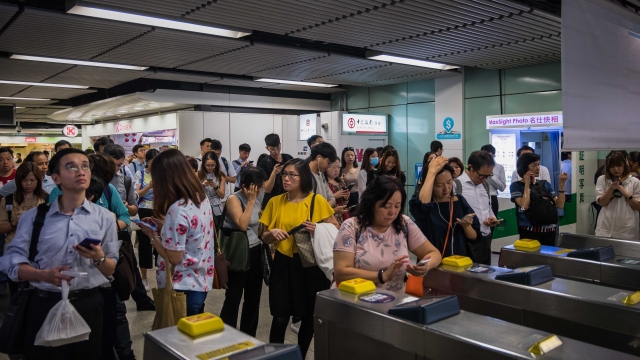 More than 200 flights to and from Hong Kong were cancelled Monday as airline employees participated in the city-wide strike.

More than 200 flights to and from Hong Kong were canceled Monday as mass protests and strikes disrupted the city's transportation services.

The majority of those cancellations are with Hong Kong Airlines and Cathay Pacific — both of which are local carriers. Cathay Pacific urged passengers to "postpone non-essential travel" and said it would waive rebooking and rerouting fees.

The airline didn't give a reason for the cancellations, but the Hong Kong Confederation of Trade Unions said about 1,200 of the carrier's pilots and cabin crew participated in the city-wide strike Monday.

The city's rail and subway services were also affected Monday, with some routes getting suspended as protesters blocked trains doors from closing during the morning rush hour.

Demonstrators have been protesting for more than two months over a now-suspended extradition bill, which would have allowed China to extradite suspects from Hong Kong.

But critics still want the bill to be fully withdrawn. They also want leader Carrie Lam to step down and an independent investigation into allegations that police have used excessive force on demonstrators and democratic reforms.

But Lam, who condemned the latest round of protests on Monday, offered no concessions when she warned that the city was "on the verge of a very dangerous situation."

"Such extent of disruption, in the name of certain demands, or uncooperative movement has seriously undermined Hong Kong's law and order. ... This is the time for us to rally together to set aside differences and bring back order and say no to chaos and violence," Lam told reporters.